This year, I have tried out many Christmas fruit cakes. While there are variations in the mix of dried fruit (or, indeed , fruit mince!), type of alcohol, or the exact way to mix the batter, the cake that comes out of the oven share important characteristics of a dark fruit cake, ripe with tradition and dried citrus peel.

What happens when a French chef puts his spin on a fruit cake? Will it have unexpected quirks, as though you were served baguette instead of scones for Devonshire tea?

I had one answer to this question when I made Philippe Rochat’s recipe for Serious Fruit Cake, reproduced on the now-dormant fxcuisine. (The site is still well worth a visit and still sets the benchmark for memorable and often unusual food adventures. For this cake, FX used one of the most expensive brands of rum in the world – yikes!) According to FX, this recipe was designed by Swiss chef Philippe Rochat as food to be taken on an expedition by his friend and adventurer Mike Horn. 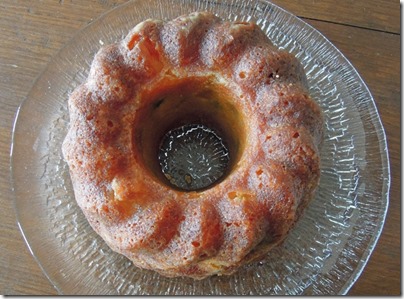 The recipe deviated from the usual fruit cakes in a number of ways. It used equal proportions of flour, sugar and butter (like a pound cake). It used candied fruits rather than dried fruits (and decent candied fruit was much harder to find around here). It also added ground almonds. The small amount of almond meal gave the finished cake a dense crumb, so that it looked, and tasted, a bit like a flour-less almond cake.

The resulting cake was rich and buttery, it even smelled like a little bit like brioche, quite different from the other Christmas cakes I’ve made, which lets the flavour and smell of dried fruit dominate. Made in a bundt pan, it was also a striking one in presentation. When we cut into the cake, the dark brown exterior have way to a rich yellow interior, studded with pieces of semi translucent candied fruit. It was like finding a secret garden.

We took these to a birthday lunch. All diners (except one with a nut allergy…oops!) gave it rave reviews. We probably wouldn’t call it a Christmas cake – if your guests are expecting a traditional dark fruit cake enriched with dark treacle, this probably won’t do. On the other hand, they all agreed it is a beautiful tea cake and I should make it again.

We nibbled on the mini texas muffin-cakes for a couple more days. They stayed moist thanks to the rum syrup, and I think the cake even improved on the second day.

Baking notes: I made this in a 3/4 sized bundt pan borrowed from a friend (I am slowly becoming convinced that bundt cakes don’t have to be slightly dry, gigantic blocks of baked flour and egg). There was enough batter left over for three Texas muffin-sized mini cakes. Both times, the cake became very dark on the outside, and I followed FX’s suggestion to put foil over the bundt pan to prevent the top of the cake burning.

Next time, my only tweak to the proportion of ingredients would be to reduce the sugar in the rum syrup, as the combination of candied fruits and rum syrup made the cake a little too sweet for my taste. 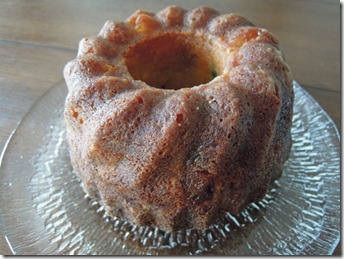 Adapted from fxcuisine, my tweaks to the method in brackets.

Chop candied fruits into cubes but keep the cherries intact. Soak fruits in rum for a couple hours, or overnight.

Work the butter until it is soft but not melted. The recipe calls for butter in the precise consistency French pastry chefs call beurre pommade or ‘butter in ointment consistency’. Add the sugar and work it into the butter. (Alternately, beat room temperature butter with sugar until light and fluffy.)

Add the eggs, mix until combined. Then, add the flour, baking and almond powders (I mixed the dry ingredients together before adding to the egg mixture). Work everything to a smooth mixture with a paddle.

Add the walnuts. Drain the candied fruits and add to the egg mixture. Mix until you get a smooth mixture.

Pour mixture into the cake pan. If using metal cake pans, grease and line the inside of the pans with baking paper. The recipe can make one large loaf or three small loaves.

Bake for about 30 minutes for a small cake, for a large cake up to 60 minutes, until a skewer inserted into the cake comes out without any crumbs. If the top of the cake becomes very dark, cover it with a piece of foil.

Remove to a cooling rack and unmould as soon as the cake is hard enough to hold together.

Melt 100grams/3 oz sugar in 100grams/30z water and heat to make was French confectioners call a ’30 degrees syrup’. Wait until it is cool, then add the rum you have used to soak the candied fruits in.

(Poke holes in the cake with a skewer.) Then, pour the rum syrup over the cake and let it soak in.