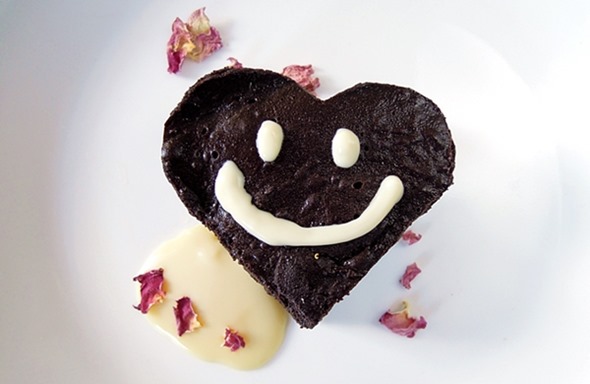 What did you do on Valentines Day?

I went home to give Mr Gander plain yoghurt for dinner.

You see, Mr Gander had two wisdom teeth removed on 14 Feb, so ‘real food’ was out of the question. Diddums. Instead, I drew a heart on his yoghurt with pomegranate molasses as an ironic V-day gift.

On Saturday, he could eat food again. To celebrate this milestone, we had momofuku pork belly buns (another post coming soon) and boca negra.

Boca negra: a spoon-able, custard-fudgy, intensely decadent, dark chocolate concoction that leaves traces of itself every step of the way. Dessert forks, plates, cake knife, the mixing bowl, whisk, spatula, all had a slick of rich, soft chocolate that whispered ‘lick me’ – no wonder the cake is called ‘boca negra’ or ‘black mouth’ in Spanish. 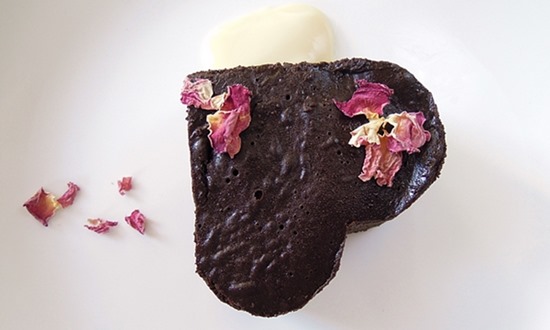 The texture was similar to the Orbit Cake from David Lebovitz’s Ready for Dessert (a version of the Orbit cake recipe is on his blog). The main differences are boca negra is not flourless, but uses 1.5 tablespoons of flour, and the baking time is much shorter at 30 minutes rather than 1.5 hours. I also saw a version of boca negra with chipotle chiles on Epicurious It adds a throat warming heat to the chocolatey-ness, which I imagine would be great for those hibernating winter months.

But back to Julia Child / Lora Brody’s version of boca negra.

Saturday was the second time I made boca negra. The first time was for our Chinese New Year, seven-course, twelve-people feast. We had three desserts (I got a bit carried away…), and this was the crowd’s favourite.

The guests liked it so much that there was no cake left for me to photograph the next day. When twelve people like a cake, finishing the cake will be, well, a piece of cake.

So I had to make another boca. (The things I do for this blog)

The batter is a mixture of bourbon and sugar syrup, lots of dark (bittersweet) chocolate, a smidge of flour and lots of butter. Once the ingredients are mixed together, the batter is poured into a lined cake pan, and baked in a water bath for 30 minutes exactly. Then, it is flipped out of the cake pan in a series o f

The first time I made boca negra, the bourbon sugar syrup wasn’t quite warm enough to melt the chocolate and incorporate all of the butter. I warmed up the rest of the butter before adding it to the chocolate mixture. This almost led to the mixture separating, but my Bosch mixer performed a minor miracle and turned the oily looking mess into a shiny, satiny batter in less than a minute.

The second time, I used a double boiler – with water on the gentlest heat so that it steamed without boiling – to melt and mix the batter. The double boiler melted the chocolate and butter gradually and beautifully, and soon I had that richly glossy, velvety mixture again.

I could look at the sheen and colour of the batter forever, if I didn’t like eating the finished cake more.

I had fun ‘plating up’ the second boca, using rose petals, dried strawberries in a brown sugar syrup, and white chocolate bourbon cream on the side.

On a whim, I cut a slice of boca into a heart shape. Later, I put a smiley face on it. Mr Gander thought the heart shaped slice was cheesy, though admitted he liked the smiley. Then again, he also said he preferred his V-day yoghurt. Men?! 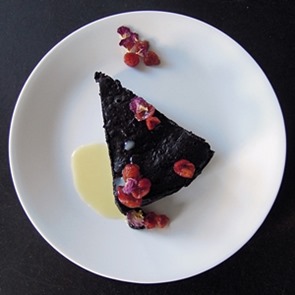 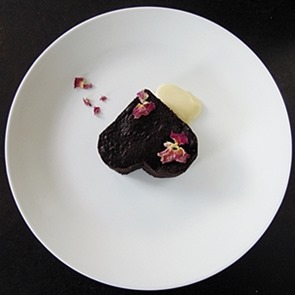 In the recipe, the boca negra is accompanied by a white chocolate and bourbon cream.

This was a straightforward ganache-like mixture. Not wanting bourbon to overpower the white chocolate, I added the bourbon one tablespoon at a time. After two tablespoons (30ml), or about half of what the recipe called for, I was happy with the taste.

The result was a pale cream-coloured mixture which was closest to the colour of the white chocolate, though it seemed to become a paler cream after it has cooled. The warm mixture flowed stylishly over the slices of cake and pooled on the plate. Once cooled in the fridge, it became a thicker mixture that could almost be dolloped.

We liked the taste of the cream, but on balance, I didn’t think the boca negra needed a rich garnish. Being a dark chocolate fiend, I preferred the way rose petals subtly lifted the chocolate into more exotic dimensions flavour-wise.

For the boca negra recipe, go to Cathy’s blog A Frederick Food Garden. It is also on page 253 of Baking with Julia by Dorie Greenspan.

To see who else have tell-tale black mouths, go to Tuesdays with Dorie. 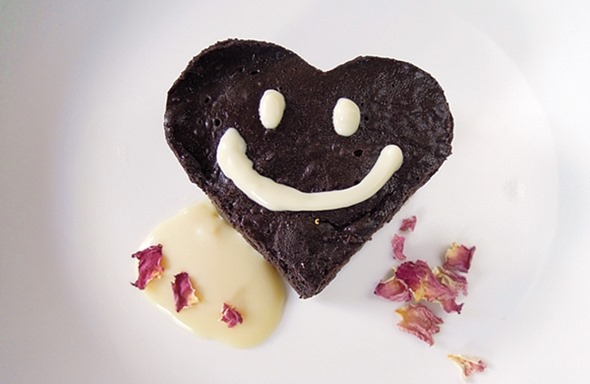