Bun and pork belly, Momofuku and me

I almost started this post with a bad pun along the lines of “bun in the …” The alternative was a bland introduction that begs the question: everyone discovered Momofuku buns in 2007-08, why another post about it?

I have been eating steamed buns since childhood, and now I want to learn to make them.

I am slightly addicted to the combination of pork belly, soft steamed bun, herbs and hoi sin.

There is always room in the blogosphere for one more bun.

Besides, Momofuku took the pork belly bun to New York, while my bun goes for a stroll back to China. 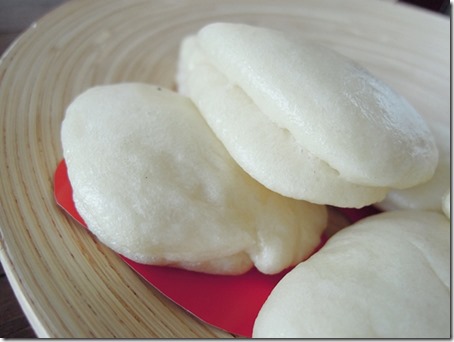 For people who have tried baking bread, you know bakers can talk forever about the right oven temperature, and how to control humidity to get the ‘spring’ in the dough (ice cubes, boiling water, spray bottle, you name it).

Steamed buns are blissfully simple by comparison. You boil water, place a steaming device over boiling water, and let the steam do its thing. There is no adjusting temperature, no adjusting humidity. Steam is steam is steam.

I once read a comment on an Australian recipe website, where someone complained about the texture of steamed buns. “It’s soft and wet”, she says in disgust, as though she expected a crispy browned crust.

So, just to clarify, steamed buns are ‘wet’ in the sense that there will be no browned crust. They will be soft, white, somewhat fluffy. If made well, your teeth should sink into a moist silken pile. The taste should be neutral (bland) so that they form the perfect foil for strong flavoured fillings.

They also look very different from your everyday sourdough rolls, and was a novel sight even in our kitchen, which sees its fair share of Chinese and Asian cooking. Mr Gander, and our friends, were all intrigued by the armada of freshly steamed buns, sitting pretty in the bamboo steamers.

The instructions are not hard to follow. All you need is a little patience, and a willingness to embrace steam, and you too can have white, fluffy (and ‘wet’) buns of your own.

Milk powder: the recipe calls for 3 tablespoons non-fat milk powder. If you don’t have milk powder, substitute with 3/4 cup skim milk and reduced the amount of water in the recipe by 3/4 cups.

Lard: lard is commonly used in traditional Chinese cooking (including stir fries). I think lard is mostly used to give the dough a softer texture, and also enriches the dough. If you don’t like to use lard, substitute with vegetable shortening. Apparently an earlier version of the recipe did not use lard (see this blog on Kitchen Sidecar), so you may be able to leave it out for a leaner bun.

Flour: some versions of this recipe call for high gluten bread flour (Australian Gourmet Traveller), others for all-purpose or plain flour (Martha Stewart). I used a type of flour used for making dumpling dough, which has medium level gluten. With a bit of extra proofing time, the results were really good. An earlier version of this recipe uses lower gluten cake flour for a softer dough, but I think the resulting dough would require more skilful handling to develop the gluten.

Shaping: the recipe says to roll each little ball of dough into an oval, and then use greased chopsticks to fold the oval in half, lengthwise. This creates the characteristic fold in each Momofuku bun. I found that it is perfectly easy to just fold each oval in half by hand, without greasing up a chopstick. If it’s not perfectly folded, just call it rustic.

Freezing: the buns freeze well, though there is nothing quite like a just-steamed bun. Just make sure they are cool when you freeze them so there is no steam to turn into condensation and ice. To re-heat, just steam the buns for between 5-10 minutes. When the buns are soft and fluffy again, they are ready to eat.

The recipe for buns is below. Get steaming.

The steamed buns can show off a range of fillings, including David Chang’s roasted crispy pork belly.

But when cooking for our Chinese New Year’s feast, I thought about the kind of stuffed bun that I had as a child with red cooked pork or soy-braised pork. And, I made that bun instead.

Pork: I used the slow cooker to braise a piece of pork belly to gelatinous tastiness, using the ingredients for red cooked pork. My two favourite recipes are from the blog Red Cook and Luke Nguyen’s book Indochine (see my blog about Luke’s recipe).

Greens: I used thinly sliced cucumbers and coriander. Both ingredients are light, cool and provide a refreshing/crunchy contrast to the buns and pork belly. David Chang serves pickled cucumbers with his buns, but I think the neutral flavour of fresh cucumber has its own charms. Thinly sliced shallots can be used.

Condiments: Hoi sin sauce – make sure you get a good quality bottle with a dark sauce, not a light brown or red one. And crushed peanuts – for extra crunch and another dimension in taste.

1. Combine yeast and water in the bowl of a kitchen mixer, or just in a large mixing bowl.

2. Add the flour, sugar, milk powder, salt, baking powder, baking soda and fat. If using a kitchen mixer, mix on the lowest speed for 8-10 minutes; if mixing by hand, stir the mixture with a wooden spoon for 8-10 minutes. The dough should become a dough ball that is sticky to touch but does not stick to your fingers.

3. Lightly oil a medium mixing bowl, put the dough in it, and cover the bowl with a dry kitchen towel. Leave this bowl in a warm place until the dough doubles in bulk. Depending on the type of flour you used and the amount of baking soda and powder, this should take 1 hour 15 minutes to 2 hours.

4. Punch the dough down and turn it out onto a clean work surface, and divide the dough into 50 balls. The easiest way is to:

Each ball should be the size of a ping-pong ball and weigh about 25gm.

5. Cover the dough balls with plastic (or a couple of layers of tea towels), and let them rise again until nearly doubled in size (but not fully, othewise the dough can lose its tructure). This should take 30-45 minutes.

6. While the dough balls are proofing, cut out fifty squares of baking paper that are large enough to fit each bun, at least 7-8 cm (3 inches).

7. Flatten one dough ball with the flat of your hand, then use a rolling pin to roll it out into a thin oval about 10 cm (4 inches) long. Fold the oval over in half to form the bun, and place it on a square of baking paper. Do the same with other dough balls.

8. As you shape each bun, place the bun back under the plastic or tea towel. Let the buns rest and rise until they are slightly puffy (they won’t look like they’ve doubled). This should take 30-45 minutes.

10. Place the buns and little squares of baking paper in the steamer or steaming baskets. Make sure the baking paper pieces don’t overlap with other pieces – this ensures you do not overcrowd the steamer. Steam each batch of buns for 5-10 minutes, until they are tongue-burningly hot all the way through, puffy and soft.

11. Peel off the baking paper. Allow the buns to cool, and serve immediately or freeze for later. If you used bamboo steaming baskets, you can serve the buns in the steaming baskets (after drying them out).

4 thoughts on “Bun and pork belly, Momofuku and me”