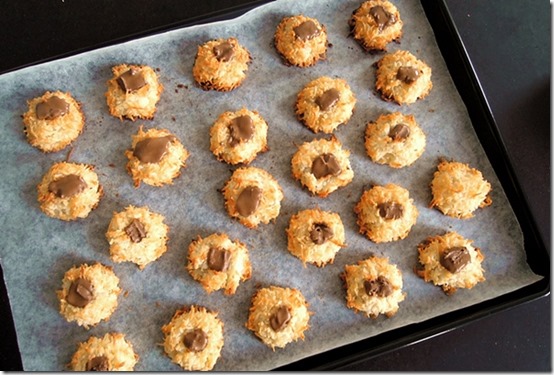 Do you remember when ‘multi-tasking’ became all the rage at work? The word appeared one day, and the human race has never looked back. Suddenly, it wasn’t enough to do one thing well, we had to be able to do several things at once. You know, like someone playing on their blackberry or iphone while not paying attention in a meeting.

Last week, I used the word ‘multi-tasking’ for macaroons. Let me explain.

At 9pm, I began baking for a morning tea. There will be a couple of people who are gluten-free, and a couple who were observing Passover. Of course, I made macaroons (the American coconut macaroons, with two “o”, rather than the French almond macarons, with one “o”). Something that is gluten free and Passover-compliant*, is a cinch to make, and still gets wows from everyone? Now that’s what I call multi-tasking. 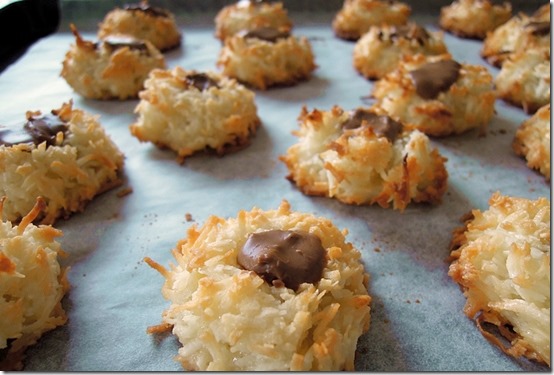 * for these colleagues at least. (I checked!)

I used a recipe for New Classic Macaroons from Alice Medrich, which has been on my ‘to bake’ list ever since I saw it on Food52 a few months ago. Alice’s recipe asks for coconut flakes. The flakes add spectacular aesthetics to the macaroons, with gradually browning edges and a “I made everything from scratch” kind of rustic look. I imagine the flakes also become pieces of chewy-crunchy as they brown. Those macaroons looked like miniature works of art.

I had shredded coconut in the pantry, rather than coconut flakes, but went ahead anyway. To make up for the loss of those beautiful coconut flakes, I added the zest of a small lemon and bitter almond essence, in addition to the vanilla essence. And after the macaroons came out of the oven, I topped half of the macaroon with a small piece of hazelnut chocolate.

Some of the chunky-ish shredded coconut still stuck out from the macaroon balls, and these pieces became fiercely golden brown in the oven while the rest of the macaroons remained pale white, or turned a faint blush of golden-yellow. The finished macaroons looked more like little hedgehogs rather than winged flaky art. But a tray of them was still a sight that says “come and eat one, you know you want to.” 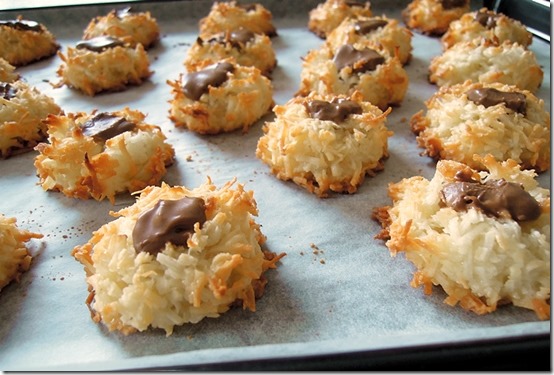 These are your traditional coconut macaroons, going from a slightly crunchy, toasty outside to a chewy-moist inside. The hazelnut chocolate – like all good chocolate – drew everyone attention. But I, and Mr Gander, preferred the plain macaroons. These had a hint of nuttiness from the almond, and a kind of ethereal lightness from the hint of vanilla-lemon. Unexpectedly hoity-toity for such humble hedgehog-like things.

As for management consulting-speak? Though I’ve found multi-tasking macaroons, I am still fighting a lone battle against other management consulting-speak. Like “to progress” (progress is a noun, not a verb!) and “proactive” (as opposed to passively-active or anti-active?). Hopefully, I will never see “proactive bran muffins”, or a recipe that starts with “to progress the yeast starter” in the blogosphere.

Medrich’s recipe is similar to another version of the macaroon recipe (Rochers à la Noix de Coco) on Chocolate and Zucchini. C&Z’s recipe does not ask you to heat the eggwhite, sugar and coconut mixture until the eggwhite is opaque, nor to rest the mixture for 30 minutes to allow the coconut to absorb some of the ‘gloop’ (in Medrich’s words). I found C&Z’s macaroon mixture wetter, and very, very sticky. I had a lot of sugary coconut bits stuck to my fingers (which is kinda fun, but messy). Medrich’s coconut mixture was still quite sticky, but I think it was easier to shape into balls.

That was a long-winded way of saying the heating and resting does make a difference. 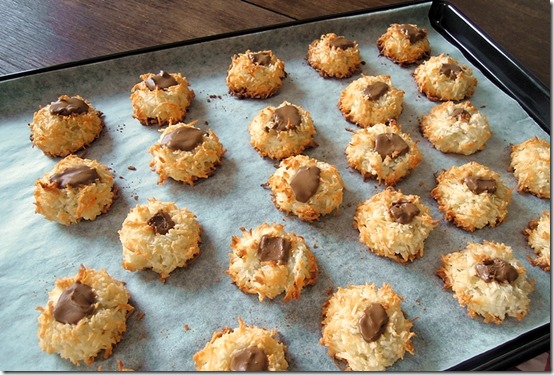 Chocolate topping: small chopped pieces of chocolate (you can use hazelnut, or dark, or maybe even white chocolate).

2. Combine all ingredients except the chocolate in a large (stainless steel) mixing bowl. Set the bowl over a saucepan of gently bubbling water, making sure the bowl does not touch the surface of the water. Alternately, combine the ingredients in a heavy bottomed saucepan (such as a good copper saucepan), set the saucepan on a simmer mat and over low heat.

3. Stir the mixture, scraping the bottom to prevent the mixture sticking to the bottom and burning. After a few minutes, the egg whites will thicken and become opaque. Take the bowl or pan off the stove and set aside for 30 minutes. This lets the coconut “absorb more of the goop”.

5. Make mounds of the mixture on the baking paper. The recipe asks for 2 tablespoons of batter per mound / ball, I used just over 1 tablespoon.

6. Bake for about 5 minutes (the edges of some of the shredded coconut may start to turn a gentle golden yellow). Rotate the pans, top to bottom, front to back, if necessary for even cooking (I didn’t rotate the pans, and the macaroons turned out fine).

7. Lower the temperature to 160C (325F) and bake for another 8-10 minutes (up to 15 minutes if you made 2 tablespoon mounds). The recipe suggests rotating the pans again halfway through (i.e. after 4-5 minutes, depending on the size of your macaroons). When done, the macaroons should have quite a few dark golden brown flecks, mixed with some faint golden bits, and still quite a bit of pale white showing through.

8. Set the pans or baking paper on cooling racks. Working quickly, insert (push, if necessary) a piece of chocolate into the top of each macaroon. Let the macaroons cool completely, and serve.

Store: according to the recipe, the macaroons keep for 4-5 days in an airtight container. Mine were all gone by early afternoon.