Pierre, there’s butter in my brioche

I had to laugh when I saw Pierre Hermé’s brioche recipe described as “richer than Bill Gates!” The archetypal French viennoiserie, compared to an all-American capitaliste?

Then, a few days ago, I read that Bill Gates is once again the richest man in the world, taking back the title from Mexico’s Carlos Slim. Such is the world of impossible riches (72 billions, really??), shady dealings and fickle finance.

If I were Bill Gates, I’d be celebrating with a bottle of the best champagne, and a few slices of baguette liberally smeared with smelly French cheese and garnished with truffles. Whole truffles. Make that the biggest truffles, just like Alice B Toklas wrote. Then, I’d spend time learning to make the perfect brioche.

I guess that’s why I will never be rich like Bill Gates or Carlos Slim. They love making money and owning Microsoft / America Movi. I like baking, and reading books for hours on end. And learning to make brioche.

This “richer than Bill Gates” recipe is the closest I’ll get to feeling like a multi-billionaire. There is a whopping amount of butter, as much butter as there is of flour. “Enriched” doesn’t begin to describe what happens to the dough, ‘supersized by butter’ is closer to the mark.

Yet, such is the miracle of brioche, what came out of the oven wasn’t stodgy, or greasy, or heavy. Although the bread was richer than any bread I’ve ever had, although we knew we were eating butter by the spoonful, the bread was light, with an open, tender crumb, almost fluffy. There was a flaky crust that shattered – but oh so delicately – when we bite into it. Then there’s the ‘chiffon cake-like crumb’, as TX Farmer from the Fresh Loaf describes.

Deceptively light and easy to eat.

My brioche dough was very soft, probably because I accidentally added too much beaten eggs. Even though it didn’t hold its shape well, taste-wise, it was still one of the more exciting things to come out of the oven.

The recipe gave us so much brioche dough, so I played with the shape of the dough, and (by necessity) different baking utensils. There was a ring-shaped brioche, made in a bundt cake pan; there were the mini cupcake-sized round; balls of brioche dough that filled a quarter-sized ceramic tart pan with a flower pattern, and were topped with sugar and more (!) butter for a caramel crust; and finally – maybe my favourite – brioche dough that was laced with quince jam and baked in fluted mini-tart pans.

And how can anyone not feel richer than Bill Gates with a mountain of freshly baked, super-enriched brioche in the house? 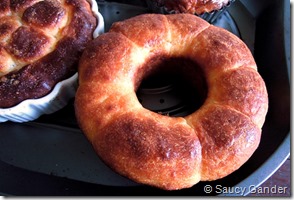 I read a number of brioche tutorials before I started this, and here’s a round-up of tips that I found useful:

And, that’s about it.

As for eating, general consensus is that brioche is at its stunning best just cooled from the oven. They were beautiful to eat within a day of baking, still quite good within two days. By day three, I was thinking of French toast (or coupétade, or bettelman). I froze some of the remaining brioche for projects like apple bread and butter pudding. Who said a mountain of brioche is excessive? 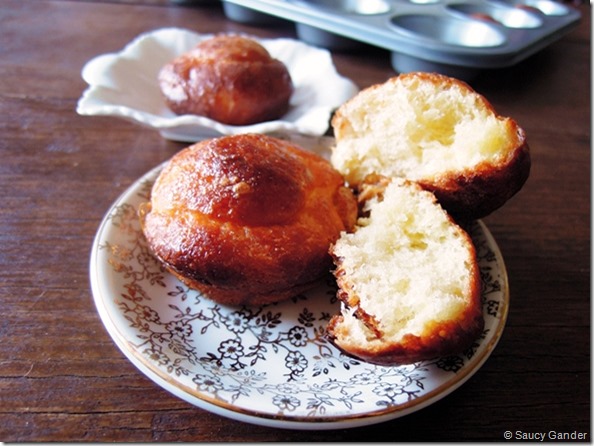 (from the Fresh Loaf)

Bread flour, 300g
Sugar, 39g (I used castor or granulated sugar)
dried yeast, 4.8g (I measured just over 6% of instant yeast)
salt, 8.4g (I measured just about 10g of coarse rock salt)
egg, 210g (three eggs came to about 240g, and I tipped all of the beaten eggs into the mixture by accident. The dough survived, but was very soft)
butter, 300g, softened and at room temperature (I used cultured European butter)

1. The first day: mix flour, sugar, yeast, salt, and half of eggs together with dough hook until it cleans the bowl.

2. Add the rest of eggs, mix until clean the bowl. It took me about 15 minutes, mixer on second lowest setting, and stopping to scrape down the bowl every now and then. The gluten must be strong before adding butter.

3. Cube butter. Add butter a little at a time, mix well each time. The idea is to mix the dough with a dough hook until the dough wraps around the hook and cleans the bowl. TX Farmer got the dough to the ‘window pane’ stage (i.e. you can stretch the dough so thin, you can see light coming through the membrane-like dough). Mine got to window pane, just.

5. The next day: divide and shape the dough right out of fridge, when it is cold and managable. This dough does expand a lot, so don’t over-fill your baking pans or moulds.

6. Proof at room temperature until the dough more than doubles in size. This took just over 3 hours for me.

Pierre, I want some more…

Here are some brioche tutorials or alternative recipes I’ve bookmarked along the way:

24 thoughts on “Pierre, there’s butter in my brioche”