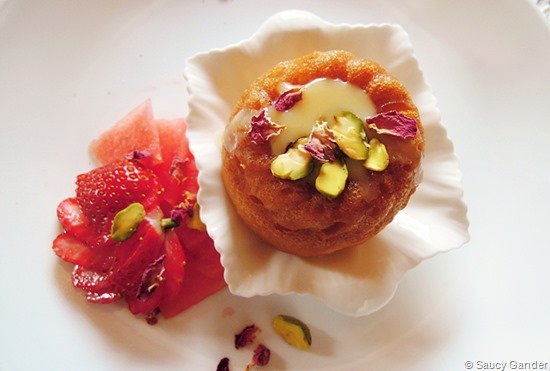 Usually, I don’t blog about the cafes and patisseries that we visit. In part because there are so many food bloggers in Sydney who discover and review each new place, often months before I make my fashionably late way there.

For me, it’s the taste of Sydney summer in every mouthful.

I served a variation of this cake for a dinner party, where the seven courses alternated between the colours red and white. Dessert was the watermelon cake turned into a trifle, with an extra sprinkling of pomegranate seeds. It was one of the hottest, most humid days in living memory. As guests began to eat the trifle, conversation around the table came to a standstill. There was only the sound of dessert forks clinking against dewy, chilled wineglasses that doubled as trifle bowls.

And tonight, the same flavour combination – rosewater, cream, watermelon and strawberries – worked their magic on savarins, for a weeknight dinner party.

Savarin is this week’s Tuesdays with Dorie (TWD) challenge. Traditionally, it is an enriched yeast cake made in a ring mould, soaked in flavoured syrup, the centre filled with cream (or similar) and fruit.

Savarin has a venerable pedigree. The cake is named in honor of Jean Anthelme Brillat-Savarin (1755-1826), gourmet and gastronomy writer. The recipe is derived from baba au rhum, a raisin-studded, rum-soaked yeast cake brought to France by King Stanislas Leszczynska, a deposed king of Poland and the father-in-law of King Louis XV. Larousse Gastronomique describes the invention of savarins as follows:

“At the same time a Parisian Maitre Patissier, Julien, by omitting raisins from the dough, giving the cake another shape and changing the syrup in which it was steeped (this syrup remained the secret of his establishment for a long time) created the Brillat-Savarin, which later became simply savarin.”

Having made an over-the-top 100% butter brioche dough recently, the savarin dough seemed easy to handle by comparison. The quantities were also small enough that I made it by hand while watching Sunday night TV. One lesson learned from the brioche odyssey is to let the butter really come to room temperature – I’m talking leaving butter out and accidentally forgetting about it for 2 hours – and cut it into small cubes. This way, it was a cinch to smear the butter against the side of the mixing bowl, and incorporate it into the dough. With a little more mixing/kneading, the dough become silky, shiny and increasingly elastic.

It was a beautiful, happy dough. 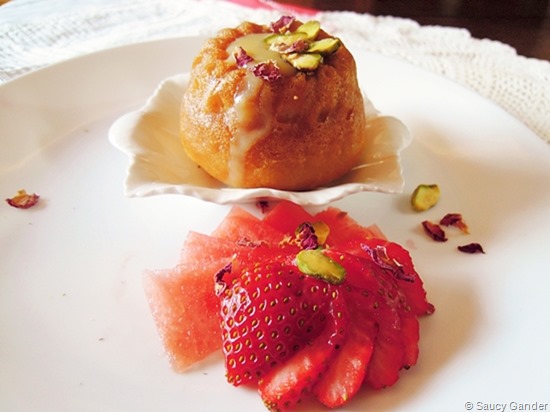 I used a mini kugelhopf pan so there would be individual cakes (mini kugel-savarins??) for dinner guests, and got 8 mini kugel-savarins from one quantity of dough. The dough almost doubled in size during the second round of proofing, and rose even more in the oven, so follow the instructions to only half fill the pan, or you may have a frankenpoof moment.

Then for the fun of syrups, creams and fruit.

While the mini savarins had small holes in the centre, they held just enough cream to enrich the somewhat austere cake. The watermelon slices and strawberries didn’t fit in the centre of the mini savarins, and were laid them out next to the savarins. The guests agreed that made it a deconstructed savarin, and either very retro or very avant-garde.

I found the slightly dry, barely sweet yeast cake held its shape well, even after imbibing all of the rosewater syrup. It became softer, without being soggy (oh the horrors of a soggy cake!). Instead of whipped cream, I used a white chocolate ganache similar to a ganache that we made for the TWD boca negra (minus the bourbon). Its creamy, intense sweetness provided a good foil for the haunting floral note from the rosewater syrup. Then, the watermelon – I was a little worried it may seem out of place next to a savarin – also worked well by finishing the dessert on a crisp, refreshing note.

Brillat-Savarin + Black Star Pastry = one of our favourite desserts.

Below is the recipe for the savarin dough, and rough recipes for the syrup and fruit (they are more like guidelines, as Jack Sparrow might have said). If you want to make Black Star Pastry’s original strawberry watermelon cake, here is the recipe courtesy of Australian Gourmet Traveller. It’s a bit time consuming but very worthwhile. 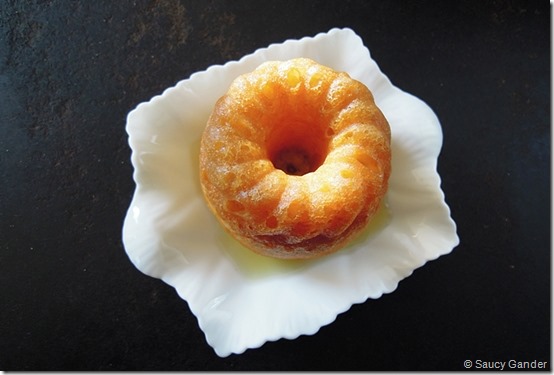 (adapted from Baking with Julia by Dorie Greenspan, and the strawberry watermelon cake from Black Star Pastry)

strawberries, one per person
small handful of pistachios
dried rose petals, to decorate

1. Pour water into a bowl and sprinkle yeast and sugar over it. Add egg and mix.

2. Put flour in a mixer fitted with a paddle attachment (or put into a mixing bowl) and add yeast mixture. Mix on low (or mix with a wooden spoon) until blended. Beat until smooth, about 8 minutes on a mixer and about double the time by hand.

3. Add butter. Beat on low or mix by hand until the butter is incorporated, and the dough is shiny and elastic. Cover bowl and let dough rise for 15-40 minutes, depending on the temperature in your kitchen. You are looking for a slight increase in volume (not double in volume) and a lightness in appearance.

4. Brush savarin pan with butter. When dough has risen, fill the pan halfway. If using a miniature mould, fill each mould halfway. Let dough rest until it (almost) fills the moulds.

5. While the dough is rising, place a rack in the middle of the oven and preheat to 350F / 180C. Bake the savarins until golden and slightly shrunken from sides of moulds – the miniature ones may take 12-15 minutes, the larger ones may be ready from 20 minutes. Turn onto a rack and cool.

1. Bring water and sugar to the boil, add rosewater, set aside and cool to lukewarm or room temperature.

2. When cool, pour syrup over savarins. I found it easier to soak the tops of savarins in their moulds, and then soak the bottom of the savarins using a wide, shallow bowl (I found I needed a little extra syrup at this point). Leave savarins to soak for at least an hour to make sure the syrup has time to fully soak into the cake, otherwise you may get dry patches – not good.

1. Bring cream to the boil. Chop white chocolate into small, even pieces.

3. Place a piece of cling wrap on the surface of the ganache (to prevent a skin forming). Set aside to cool to room temperature.

1. Thinly slice watermelon and trim pieces to the shape you like.

2. Place the slices in a single layer on a wire rack. Sprinkle with 20ml rosewater, then scatter with sugar. Leave it to macerate for about 30 minutes, then pat dry with absorbent paper.

3. Sprinkle pistachios and dried rose petals on, and around, savarins.

Note: savarins that haven’t been soaked in syrup can be kept in an airtight container for a day or so, or can be frozen for later. Defrost savarins in a warm oven for 5-10 minutes, before pouring over the syrup.