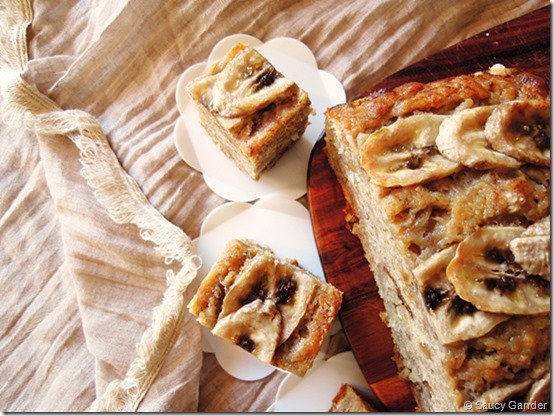 ‘Ultimate’ is a fraught word. When someone claims something is the ‘ultimate’, I can just see the pitfalls open up and a line of other ‘ultimate’ versions ready to fight for the title. For something as simple as banana bread, the word ‘ultimate’ becomes even more complicated.

Everyone has an opinion on what makes a banana bread the ‘ultimate’ of its kind. Research on the internet reveals a panoply of secret techniques / ingredients / you name it. All for what is basically a cake made with mushy bananas.

Some say the secret is really ripe bananas (but, there are even disagreements about the right degree of ripe: whether we are talking a few black spots, or black all over and squidgy and, you know, the word ‘rotten’ starts to come to mind). Some say it’s how the bananas are mashed / pureed / chopped. Still others say the secret lies in the other things in the batter – type of flour or sugar, baking soda versus baking powder, vanilla / cinnamon / nuts / chocolate, even yoghurt / butter / oil / sour cream.

Finally, some swear that the secret is for mum, or grandma, or that special friend who runs that bakery, to make the perfectly imperfect banana bread that brings back childhood memories.

Phew! Are we overwhelmed yet? 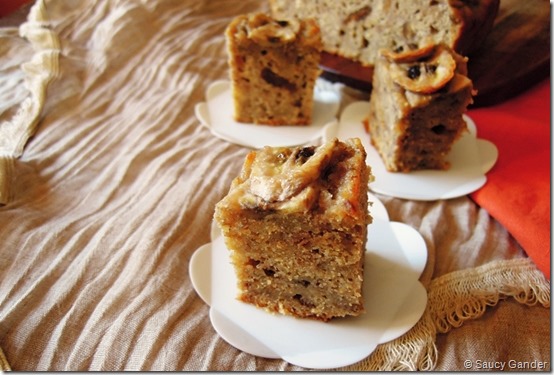 I am. This is one reason I’ve never made banana bread. Then, I saw a recipe for ‘ultimate’ banana bread on Salt and Serenity and remembered we had a bunch of bananas that were getting close to the ‘spotted leopard’ stage of ripe. Given the confluence of events, I was coaxed into the kitchen and into the banana bread arena. And that is how Mr Gander came to have his first slice of banana bread from our oven.

(As you can probably tell) I’m a little nervous about the word ‘ultimate’, but if you like a banana bread that is moist, dense, packs a punch of fulsome buttery banana flavour, and is sweet enough to complement (not overwhelm) the banana flavour, this is a good recipe. Unlike classic banana bread recipes, this one packs a hefty 5-6 bananas into each loaf, and is topped with pretty rows of banana slices and a slightly crunchy sugar topping.

We served this on a weekend afternoon, cut into dainty afternoon tea sized bites. What was left of the loaf became breakfast or midday snack at work. On both occasions, the banana bread got the tick of approval, particularly from people who got crunchier bits of the banana and sugar topping. It seems slightly caramelised sugar and banana is a winning combination – an idea for a caramel and banana tart, perhaps?

This recipe takes a while. So pencil in an afternoon, get the stove and oven ready, line up a few mixing bowls, and we can get going.

Baking notes: an important step in this recipe is cooking down the juice from 5 bananas (‘juice’ the bananas by putting sliced bananas into the microwave, or freezing and defrosting them) until you are left with a kind of concentrated banana essence. This is added to the batter to give a stronger banana flavour without the added moisture. Then, sliced bananas are placed on top of the batter and sprinkled with sugar, thus ensuring a crispy topping and a pattern that looks like banana chips.

(From Salt and Serenity, which in turned used a recipe from Cook’s Illustrated)

2. Defrost 4 bananas, mash the bananas, and put banana mash into a wire strainer for about 15-20 minutes, stir occasionally.

Or, if using fresh bananas, place sliced bananas into a bowl. Cover with plastic wrap and cut several steam vents in the plastic wrap. Microwave on high until bananas are soft and have released liquid, about 5 minutes. Place cooked bananas in a wire strainer, and placed the strainer over a medium bowl. Allow to drain for about 15 minutes as above.

3. Cook the banana liquid over medium-high heat until the liquid has reduced by half or more, this took me 10 minutes. Stir the liquid into defrosted or microwaved bananas, and mash until the mixture is smooth. Then, stir through the butter, eggs, brown sugar and vanilla until smooth.

4. Make a well in the flour mixture, pour in banana mixture. Fold with a wooden spoon until the mixture has just combined. Fold in walnuts and pour or scrape the batter until a loaf pan.

5. Slice the last banana diagonally into thin slices. Place slices in a row, like laying shingles, and sprinkle castor sugar or granulated sugar over the slices.

6. Bake the loaf until a toothpick inserted into the centre comes out clean. This took me about an hour, but our oven has been temperamental so check your loaf from about 50 minutes.