24 October (October 24, if you’re in America) is Dorie Greenspan’s birthday. I only became interested in baking and cooking in the last few years, and only began to do things properly in the last year or so, but during this time I’ve come to love Dorie’s recipes and her writing. Besides, Dorie was described by someone as “five foot nothing” – being a short person, I heartily approve of the saying that the best things come in small packages.

Around the world, food bloggers, especially those in the French Fridays with Dorie and Tuesdays with Dorie groups, have been posting to celebrate Dorie’s birthday. It’s a giant virtual party that will go for at least a couple of days as we work our way around global timezones.

Birthday parties deserve the best cake and champers, mini kievs (like the ones Johnny might make) and crabapple hooch like Liz made. And, the best parties have a gate crasher or three. This post is a kind of gatecrasher to the Dorie virtual party. It’s not a recipe created by Dorie, but it does come from a book that she penned, collecting recipes that others had baked with Julia Child.

(Sheepishly, this was also the recipe for last week’s Tuesdays with Dorie group assignment. What can I say, non-blogging life got in the way. Sorry TWD-ers all)

The recipe is a Danish braid made with a quick laminated dough. Mine was filled with almond cream and raspberry jam, topped with slivered almonds, and covered in a tangy, puckery lemon-yoghurt glaze. The lemon glaze really completed the pastry, it somehow softened the filling and brought them together in a refreshing, spritzy kind of bear hug.

To make things pretty, I also sprinkled roughly crushed dried strawberries over the top. They added more intense bursts of sweet-tart, and flecks of colour.

Mr Gander took half of the Danish braid to work, as a way of getting to know people in a new-ish area where he’d recently started working. The Danish braid was wolfed down, and I think he’s now known as the guy who brings Danish braids to work. 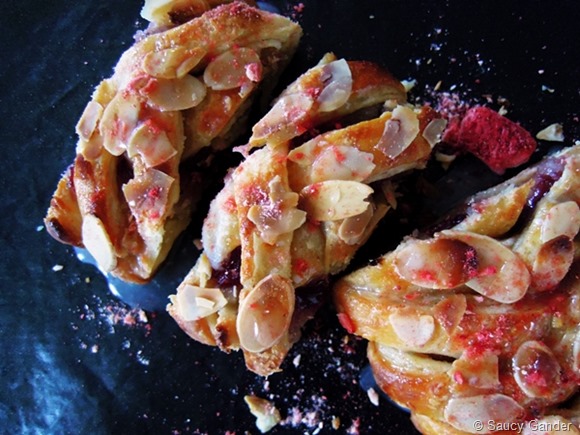 Rather than talk about all of the components of the braid, this post will focus on the quick laminated dough used in the braid. The recipe for the Danish braid has been published by the contributing baker Beatrice Ojakangas and is reproduced below.

The quick recipe takes short cuts when putting the dough together. It didn’t require the baker to make detrempe (the yeasted dough used in lamination), beurrage (the block of butter used in lamination), and all that. Instead, it was a relatively quick process in the food processor, or even by hand. Basically, you cut butter into flour and sugar until the butter is still in visible, small chunks. Then, you roll out and fold the dough a few times – even this might be a shortcut as real Danish doughs should have 243 layers, and the quick dough didn’t seem to have as many layers.

After chilling and resting, it’s ready to be used to make Danish braids.

Looking at the steps and techniques, this laminated dough also looks similar to the French technique of fraisage: where you make a dough with smallish chunks of butter (I’ve seem instructions for pea sized, or bigger), divide it into chunks, and scrape the dough across the counter with the heel of your hand. The scraping flattens the chunks of butter into sheets, so that you get a roughly puff pastry like effect when the dough is baked (see Celia’s post for an example).

I’ve even seen pie crust tutorials that combine fraisage and folding the dough. It would be interesting to compare the differences and trade offs between a tender crust (before the dough is kneaded, which can develop gluten) and a flaky crust (after fraisaging and/or folding, which presumably develops gluten but creates a layered, puff pastry like texture).

The result was a pastry that had tight layers that were lightly crisp on the outside and soft where it came into contact with the filling. And it flaked under the fork, and stood up to the lemon-yoghurt glaze.

Incidentally, I made the quick laminated dough and the croissant dough on two of the hottest days we’ve had this year, both days were hovering around 35-38C (95-100F). Butter ‘sweated’ and threatened to melt, I had visions of utter disaster. It’s probably a testimony to the resilience of both recipes that I have ended up with decent croissants and Danish braids – so go forth and laminate/fraisage, people, the pastry is worth the effort and you get to play around with lots of butter. 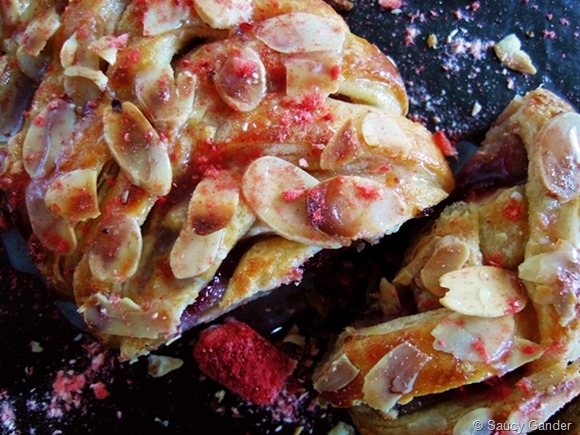 Back to the birthday girl and birthday recipe

This recipe seems infinitely adaptable, once you have the basic dough. I used an almond and raspberry jam combination, using commercial raspberry jam to save time. Other combinations that I’ve seen include apples, sour cherry, goat cheese (instead of pastry cream or almond cream), and I think even a savoury filling. These inventions and reinventions seem just what Dorie would like, as her recipes often end with ‘bonne idees’ for playing around or adapting the recipe.

Dorie’s dinner parties would be the best ever.

2. Spread some of the fruit filling down the middle third of the dough. Top with some of the cream or almond filling. Note: you may not need the entire amount of either filling

3. Using a pizza cutter or sharp knife, cut 12 – 14 slanting lines down each side angling cuts from the center to the edge and cutting strips about 3/4 inch (2cm) wide.

4. Fold strips of pastry into the center, crisscrossing the filling by alternating strips from each side. Lightly press ends to seal and run your hands along the sides of the pastry to straighten.

5. Brush with egg white, sprinkle with sugar and almonds. Cover with a kitchen towel and let rise at room temperature until it looks and feels puffy. About 30 minutes

7. Stir coffee (or lemon juice and yoghurt) and powdered / icing suger together to produce a smooth shiny glaze. Spoon glaze into a zip-loc bag, seal top and snip corner with scissors to create a pastry bag. Squeeze squiggles of glaze over pastry and allow to set. (Here, I also sprinkled crushed freeze dried strawberries on top, for colour and flavour) Serve.

1. Pour water into a large bowl, sprinkle over yeast and let soften for a minute.

4. Empty contents of food processor into the bowl with the yeast mixture. Very gently turn the mixture over with a rubber spatula until the dry ingredients are moistened. Butter must remain in discrete pieces.

5. Cover bowl and refrigerate overnight (or up to 4 days)

6. Lightly flour work surface, turn the dough out and lightly flour the dough. Pat into a rough square.
Note: If at anytime the dough becomes too soft, cover with plastic and chill.

11. Wrap dough in plastic and chill at least 30 minutes (up to 2 days). Dough can be frozen for 1 month. Thaw in refrigerator overnight.

2. Add almond extract and 2 tbsp of the beaten egg white. Process until mixed.

3. Store in airtight container in the refrigerator until needed (up to 1 week). Bring to room temperature before using.

1. Stir berries and sugar together in saucepan. Cook on low, stirring until most of the liquid is absorbed and filling is glossy. (Can be done in Microwave). Stir in lemon juice.

2. Scrape filling into a small container and cool to room temperature.

3. Seal container and chill. Will keep refrigerated for 1 week.