Sometimes, a phrase, an image, or an object triggers your memory and it’s as though you are transported back to another place. Last night, reading Laura’s blog, Laura’s Mess, I remembered standing under Western Australia’s big, open sky, with its sense of so much space, feeing the warm wind and warmer sun, and ouch-hot white sand under my feet.

Earlier that evening, we were planning a dinner party for 12 (!). Cheese and oatcakes got on the menu. And I remembered the oatcakes we had in Scotland. And that story on a packet of oatcakes, solemnly explaining that oatcakes began from the Scottish people’s frugal habits, when they would save their morning porridge by drying it into a cake for supper.

So it was that I found myself making oatcakes that evening.

I used a recipe from Hugh Fearnley-Whittingstall who introduced it thus: “This recipe is Bill Cowie’s, island manager of Rona in the Inner Hebrides. He made a batch when we were filming and fishing with him in July. We devoured every last one, with cheese and homemade chutney.”

I almost followed the recipe, the only changes I made were adding a bare half teaspoon of crushed lavender, and an overflowing teaspoon of honey, into the oatcake mix. I’ve been reading about lavender pepper spice mixes, and oats just love honey, and the whole thing just came together.

The oatcakes had a healthy back of the throat kick from a mixture of black and white pepper – I’d like to use the sweeter pink pepper next time – a bare hint of open grassland from the lavender, and the barest mellowness from the honey. Their flavours played off each other and made me want to use the lavender, honey and pepper combination in other things.

The oatcakes were so very crumbly, and just out of the oven they had a golden toasted flavour. All we needed was a strong cheddar and home made chutney.

Reading about the Hebrides also reminded me that I have yet to share photos from the Isle of Iona. Eeeep. A few of the photos are after the recipe.

(mostly based on this recipe for Bill’s Rona oatcakes, published by Hugh Fearnley-Whittingstall)

Add-in: a small handful of sunflower or other seeds, or a tiny amount (half to one tsp crushed culinary lavender – just make sure the final cookies don’t taste like potpourri or grandma’s sock drawer) and a heaping tsp of honey.

1. Preheat the oven to 180C/350F/gas mark 4 and dust two baking trays with flour. Mix all the dry ingredients in a bowl. Pour the oil into a well in the centre, then pour in enough boiling water to bind it into a firm, not sticky, dough. Work quickly. Don’t worry if you over-water a bit – you can remedy the situation by adding more oatmeal.

2. Form the dough mixture into a ball and leave it to rest for 2-5 minutes (Fearnley-Whittingstall describes this as the time it takes to open a bottle and pour a glass of wine). Roll out the dough on a floured surface (dust with flour, too, if it’s sticky) to about 5mm thick.

3. Cut out discs with a cookie cutter (I used a small wineglass). Place on the baking trays and bake for 20 minutes, then turn and bake for a further five to 10 minutes. Cool on a rack. Store in an airtight container.

This was a magical day in the Inner Hebrides. We were finally getting off the mainland and going onto the islands.

Iona has long fascinated Mr Gander, who is the historian around here, and has wanted to visit Iona since reading about the early Christian history associated with this island. Before our trip, while I was on Tripadvisor every day, he found time to read Johnson and Boswell’s accounts of their trip to Scotland and the Hebrides – in 1773. So he told me that Iona was yet to be restored in the 18th century, and Johnson and Boswell may have found the Convent used to keep pigs. He also told me, gleefully, about tourist accommodation in 1773, which consisted of lavish or threadbare castles (if you had a letter of introduction), or any old barn.

Luckily for us, the residents of Iona and the Duke of Argyll (who had a castle in Inverary, which was featured in Downton Abbey) had restored the Abbey and got the pigs out of the Convent. There were still signs that the Abbey had been exposed to the Hebridean climate – ferns growing in columns, dripping patches of damp on the walls. But all this added to its rather solemn atmosphere, when seen next to the rows of chairs and bibles used by the island residents today. The Abbey also had such beautiful, mysterious play between light and shadow. 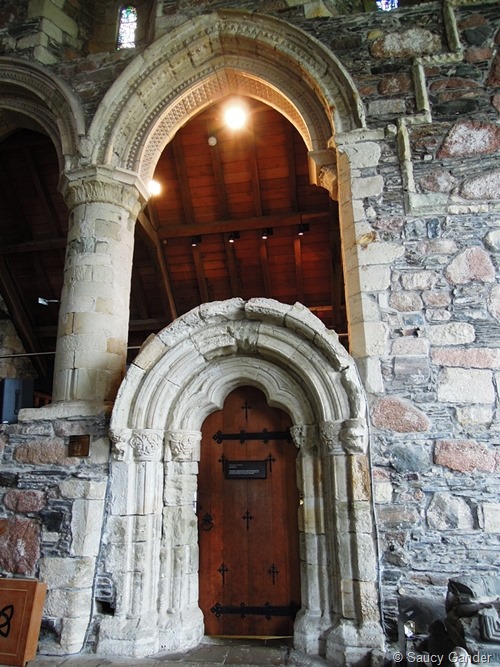 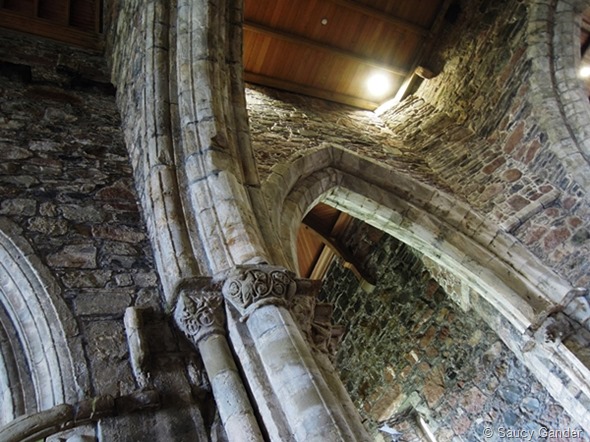 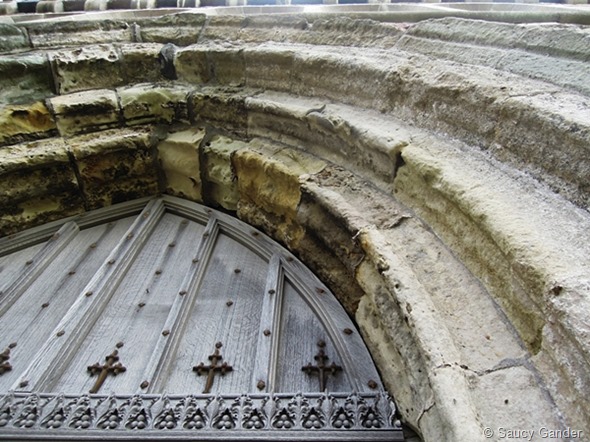 I found myself becoming contemplative, thinking about how the early monks lived, devoted their lives to creating illuminated manuscripts like the Book of Kells, and carried it to Dublin in long boats.

We also saw our first Calmac ferry on the way to Iona. I may have squealed as we drove the car onto the ferry in Oban… and to top it off, a Royal Mail van was on the Iona ferry with us, I really wanted a Royal Mail van of my own.

There’s no Royal Mail van in our carpark, yet. To sign off, here is one more photo showing the moody fantastical sunlight in the Hebrides (plus the clouds and the constant threat of rain). 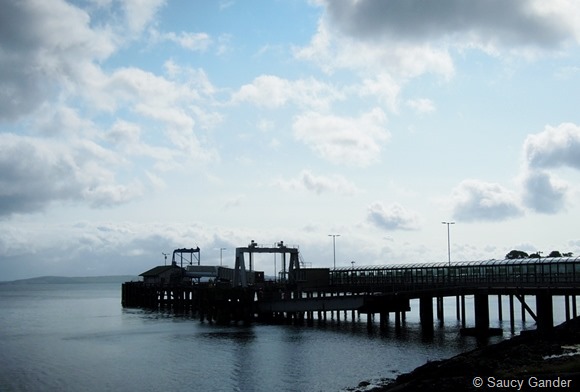