A beachside Christmas, a recipe for spicy cranberries and raisins

Christmas lunch has come and gone. Once again, I didn’t take photos during lunch, as I didn’t want to interrupt the festivities. This morning, I sat in a garden looking out over the ocean, in a white tee and white sun hat, writing down notes from the meal: what worked, what can be better next time.

I was peaceful, lulled into daydreams, detached from the comings and goings in the house, yet more aware, alert to the sounds and sights of nature around me. The sun was shining; turning the ocean shades of royal blue, deep sea blue, turquoise. The sun made dappled patterns through a tree. It was warm on my back, yet a sea breeze brushed across my notepad. The waves continually crashed on the rocks, again, and again. White clouds formed fantastical patterns on the edge of an equally blue unending sky.

Inside the house, guests talked about local traditions over tea and slices of Sri Lankan Christmas cake. Every year, the local fire brigade dresses up as Santa and his helpers, drives a fire truck to every local house and popular beaches, and gives out lollies to children (and the young at heart). It is one of my favourite part of Christmas on the South Coast – anyone can go to a shopping centre and have their photo taken with Santa, but how many have caught a bag of lollies from Santa standing on top of a big red fire truck?

Here is our Christmas lunch menu, which featured flavours from Sicily and Morocco rather than Ye Olde England. The recipe for spicy cranberries and raisins follows – halfway between a pickle and a chutney, a nod to tradition in an unorthodox Christmas meal. Recipes for a few other dishes will be posted over the next month or so.

Eggplant zaalouk: eggplant and tomato, cooked down to a sweet-savoury jam, bursting with lemon and coriander flavours; this was also good eaten by the spoonful the next day.

Seed and nut loaf: it was described as a life changing loaf of bread. It may not be traditional, but it was pretty special. Addictively moreish, yet healthy. I’m already making a second loaf tomorrow.

Macaroni pie: inspired by this passage in the novel, The Leopard (Il Gattopardo), by Tomasi di Lampedusa:

“…the aspect of those monumental dishes of macaroni was worthy of the quivers of admiration they evoked. The burnished gold of the crusts, the fragrance of the sugar and cinnamon they exuded, were but preludes to the delights released from the interior when the knife broke the crust; first came a spice-laden haze, then chicken livers, hard boiled eggs, sliced ham, chicken and truffles in masses of piping hot, glistening macaroni to which the meat juice gave an exquisite hue of suede.”

Kale, walnut, pecorino salad with spicy raisins: we were compulsively putting more of this salad on their plate, and it even left us feeling a little healthier than before.

Spicy cranberries and raisins: something between a pickle and chutney, full of good things.

Mandoline potatoes and sweet potatoes: sliced paper thin, baked in duck fat with lemon thyme and baharat spices. This looked like an accordion. How could I resist an edible accordion?

Fennel, cucumber, apple, coriander and mint, with a splash of orange blossom water

Sri Lankan Christmas cake: we thought it tasted just like Christmas, despite all the strange Sri Lankan preserves, and may just be better than Delia Smith’s legendary Christmas cake.

Watermelon with rosewater: garnished with rose petals, this was a distant echo of Black Star Pastry’s beautiful watermelon cake. Another take on the cake is here. 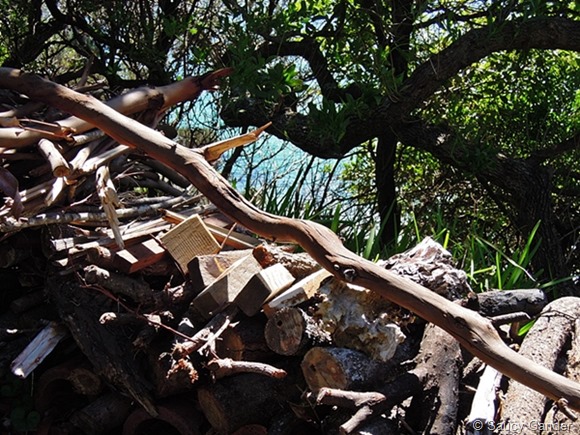 I found this recipe through the Bitten Word, from the October 2013 edition of Bon Appétit magazine. The guys from the Bitten Word served this during a dinner party where they discussed (government) shutdown shenanigans, and thought the raisins were “so juicy and flavorful that they really threatened to steal the show”.

Things that can come in a jar, sweet-sour-spicy, perfect accompaniment to a duck confit. All these things lingered in my mind, and when I thought of duck for Christmas lunch, I knew I was making these pickled raisins too.

The recipe turned out to be incredibly simple, probably foolproof. I made very few changes, by adding dried cranberries as well as raisins (it was Christmas after all), and added extra thyme and a good few black peppercorns. Instead of white wine vinegar, the beach house kitchen had apple cider vinegar and white balsamic, so that’s what I used and it seemed fine. I also let the mixture pickle for a day before serving, which gave the aromatics a chance to mellow and mingle. During Christmas lunch, people peered into the jar, smelled, tasted, looked thoughtful, smiled and came back for more.

Zac and Clay from Bitten Word had a couple more ideas for these spicy pickled raisins, such as adding it to a pork roast or using a thickened mixture to glaze a duck confit. I thought they would also be great for a picnic, or on a cheese platter, or added to other salads like our kale salad.

(from Bon Appétit via the Bitten Word)

1. Bring vinegar, sugar, mustard seeds, rosemary and thyme sprigs, chiles (or chilli flakes), salt and 1 cup water to a boil in a medium saucepan. Reduce heat and simmer, stirring occasionally, until sugar is dissolved, about 3 minutes.

23 thoughts on “A beachside Christmas, a recipe for spicy cranberries and raisins”