Sunny-lemony ricotta cookies, because we cannot live on bread alone

January came with an avalanche of green juice blogging. Even this wee blog, untrendy as it is, got with the zeitgeist and talked about bird seed bread, kale, Burmese salads, and accidental trendiness healthiness.

Then, I bought far too much ricotta. For the past week, our diet has been full of ricotta-laced pesto and ricotta mustard tarts (the tarts adapted from the great Dorie herself). And these ricotta cookies.

These cookies were light, cake-like and fluffy. I added as much lemon zest and lemon juice as I dared, with a fat pinch of crushed lavender buds. And the taste? Creamy and primly sweet from the ricotta and castor (granulated) sugar, but thanks to the lemon zest and lavender, each cookie was a sparkling, sunny mouthful.

Compared to the excesses of December – such as the darkly spiced Sri Lankan Christmas cake lurking in some of the photos – these lemony ricotta cookies seemed positively fresh and sober. Like calisthenics early morning yoga.

I wasn’t planning to post about the cookies. They were a quick weeknight dessert that used up some pantry staples. But when we both went back for seconds, I decided to salvage some photos for the blog. Hence the liberal handful of icing sugar to hide cosmetic sins (I dropped the cookie dough rather unceremoniously on the baking tray, resulting in lumpy cookies).

Recipe notes: I have had a few recipes for ricotta cookies bookmarked forever. This time, I used the recipe from Giada de Laurentiis, because it uses up to twice as much ricotta as other recipes (and less butter to compensate), thus suitable for our rather luxurious ricotta glut. Other than the amount of ricotta used, it is similar to other recipes for Italian ricotta cookies, though some Italian recipes flavour the cookies with aniseed or arak, which sounds intriguing and would be an excuse to buy arak.

Giada’s recipe includes a glaze for the cookies. I thought the cookies were sweet enough on their own and did not add a glaze, but I’ve added it below in the recipe. I would consider reducing the amount of sugar in the cookies themselves if I was going to add a glaze.

The cookies had a slightly crisp outside and a soft inside on day one. On day two, after being in an airtight container, the cookies had softened so they became even more cake-like. We thought they were best eaten just out of the oven or within 24 hours, though they kept for about 3 days.

About that Sri Lankan cake lurking in photos

Even though it’s way past Christmas and we have had enough of fruit cakes and mince pies for another 11 months, I just want to say – make the Sri Lankan Christmas cake in 2014. At the Christmas table, it set off a number of dreamy-eyed reminiscence about travelling around the subcontinent and finding dark, spiced fruit cakes. Cakes that remind one of English Rose fruit cakes, but richer, more moist, more mysteriously and excitingly spiced, and therefore redolent of all that was memorable about those journeys. And that was before people got to the cashew marzipan icing.

Actually, if you like darkly spiced fruit cakes and want a reason to make this cake before December 2014, a Sri Lankan colleague tells me they are also served at weddings, which makes them year-round celebratory cakes.

I used the recipe from Three Little Halves blog this year, because I found the same types of preserves. Another tried-and-true recipe comes from Charmaine Solomon’s The Complete Asian Cookbook (and is reproduced on the ABC website). 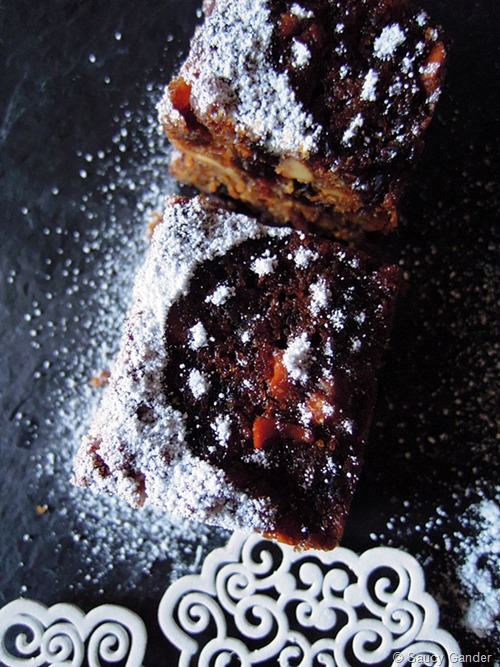 2. For the cookies: In a medium bowl combine the flour, baking powder, and salt. Set aside. (Optional step: rub lemon zest into the sugar with your fingertips until the sugar is fragrant with lemon oils)

3. Beat together butter and sugar until it’s light and fluffy. Add the eggs, 1 at a time, beating the mixture until it’s incorporated. Add the ricotta cheese, lemon juice, lemon zest (if not already rubbed into sugar), and lavender, mix until everything is combine, then stir in the flour mixture.

4. Line 2 baking sheets or baking trays with baking paper. Spoon the dough (I used 1 tablespoon for each cookie, Giada’s original asks for 2 tablespoons per cookie) onto the tray. Note: I ended up with quite a thick mixture, so my cookies didn’t melt and spread, though they did puff up a little. The picture on Food Network showed a slightly flatter cookie though.

5. Bake for 10-12 minutes (or 15 minutes if using 2 tbsps of dough per cookie). The cookies won’t brown on top, mine became light golden or medium brown at the edges, and light brown on the bottom. Remove from the oven and let cookies cool on a cooling rack for 20 minutes before adding the glaze, if using.

6. For the glaze: Combine the icing/ powdered sugar, lemon juice, and lemon zest in a small bowl and stir until smooth. Spoon about 1/3 to 1/2 teaspoon onto each cookie and use the back of the spoon to gently spread. Add sprinkles, if using. Let the glaze harden for about 2 hours.

17 thoughts on “Sunny-lemony ricotta cookies, because we cannot live on bread alone”