It must be Australia Day: not-quite-poutine meets vegemite

I’ve resurfaced! Mid-January was a time of mysterious illnesses (caught from work colleagues who caught it from exotic holiday locations), early bedtimes and absence from the blogosphere. Thankfully the exotic bugs have departed, and I’ve picked up the camera again.

Just in time for Australia Day. And what could be more Australian than vegemite? (If you like the sound of golden toasted cheddar on polenta chips with just enough vegemite to add a salty kick, read on, this is a post for you.)

The black, unctuous, salty, umami-laden yeast extract spread that seems to be a practical joke for everyone else, and a Masterchef ingredient for us.

The taste of the stuff seeps into the memories of old time Aussie kids, as does the ditty that can rouse a hipster crowd to a sing-along:

“We’re happy little Vegemites / As bright as bright can be. /
We all enjoy our vegemite, / for breakfast lunch and tea. […]”

Even growing up in a migrant family, I ended up eating and loving the stuff. When we were travelling through Copacabana, Bolivia, a couple of years ago, we met another group of Australians. They had packed a family-sized tube of vegemite and were having it on toast at the breakfast table. And suddenly I had such a fierce hankering for vegemite, that I asked them if I could have some.

In October 2013, vegemite turned 90. With that in mind, I thought about making something involving vegemite for Australia Day. Somehow we ended up with a riff on poutine – a poutine in concept rather than execution.

The idea developed like this, in a Smeagol-vs-Gollum style interior dialogue:

(Poutine: chips with gravy and fresh cheddar curds, has been described as heart attack on a plate, but looks strangely alluring for someone recovering from exotic bugs.)

Actually, it was pretty good, once I got over the lack of authenticity. I used a non-deep fried take on poutine from Canadian blog Seasons and Suppers as a starting point. The result was a crispy-crunchy-cheesy-saucy plateful. Crispy baked polenta chips, vegemite-enriched gravy, Australian cheddar, extra smears of vegemite, a handful of parsley and a pinch of coriander.

The photos show the first batch of ‘poutine’, which adds cheddar after the chips have been tossed in gravy (as the recipe instructed). For the second batch of ‘poutine’, I topped polenta chips with grated cheddar and vegemite for the last 10 minutes of baking, so that the cheese melts onto the polenta chips, mingles with streaks of vegemite, and forms golden, crispy-salty clusters. That was our preferred version, and it’s the version given below.

If you’re wondering, yes, I was humming the happy little vegemite song while making dinner. 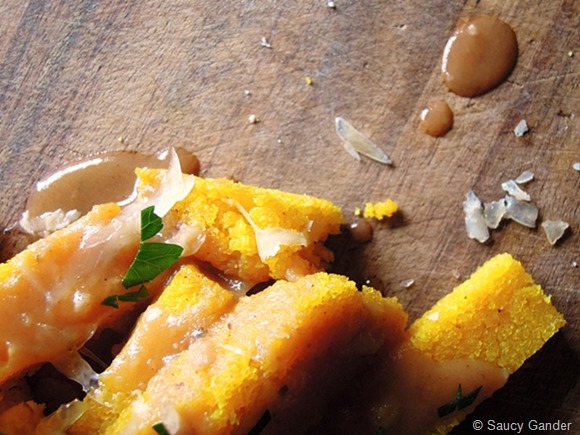 (a Saucy Gander travesty riff on a Canadian classic)

Optional: a big pinch of ground black pepper, 1/2 tsp turmeric (for colour, and because turmeric is apparently really good for you)

1. For polenta chips: using a large saucepan, bring water to a gentle boil. Mix polenta with the salt, turmeric and pepper (if using). Pour in the polenta in a stream, whisk or stir constantly (a measuring jug is handy for this step). On medium-low heat, continue cooking and stirring until the polenta becomes thickened. Depending on the type of polenta you use, this can a few minutes or 20-30 minutes. Pour in about 1/8 cup olive oil.

2. Once the mixture becomes thick but pourable, pour onto a lightly greased large baking tray, or a couple of large wooden chopping boards. Leave to cool and harden for a bit, then spread out the mixture using your hands (or spoon, or rolling pin). Cool completely, this can take an hour or more in the fridge.

3. Once polenta is cooled and firm, cut into strips. Leave to one side until the gravy is nearly done and you’re ready to bake the polenta chips.

4. For the gravy: In a saucepan, melt butter, stir in flour. Cook, stirring regularly, until the mixture turns golden brown and has a slightly nutty smell (5-8 minutes). Add the garlic and cook for a further 30 seconds.

5. Add beef stock and 1 tbsp of vegemite. Bring the mixture to a boil, stirring regularly so there are no lumps. Lower heat, stir water and cornstarch together and add to the gravy, simmer until the gravy thickens (3 to 5 minutes). Add pepper and more vegemite to taste. Keep the gravy warm.

6. To bake chips and assemble: mix together the grated cheddar with half of the chopped parsley and all of the chopped coriander. Preheat oven to 390F / 200C. Place polenta strips onto lined baking tray, brush with the rest of olive oil. Bake for 10 minutes or until lightly browned and crisp at the edges. Remove from the oven, quickly smear on the vegemite (I used a small silicon spatula to do this) and sprinkle over the cheddar and parsley mixture. Return to the oven and bake for a further 10 minutes or until the cheddar has melted and slightly toasted.

7. Remove polenta chips from the oven. Pile onto plates or a wooden board. Spoon over gravy and cover liberally with the rest of the chopped parsley.

43 thoughts on “It must be Australia Day: not-quite-poutine meets vegemite”