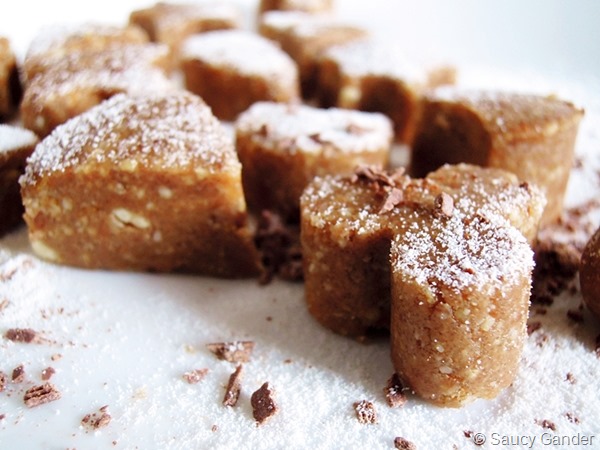 There’s Brazil and World Cup fever in the air. Friends are flying over to Brazil to watch the matches, Brazil travel documentaries are all over the TV, and suddenly it’s all about those soups and snacks sold on Brazilian beaches.

Paçoca or pacoquinha is a peanut candy that is as Brazilian as you get. And no wonder, as it is supposed to taste a little like a Reese’s peanut cup! The peanut version of the candy was created during colonial Brazil, and the internet also tells me that there is a tradition of eating paçoca during lent or on Good Friday. As a bonus, because the candies are made using cassava / tapioca / manioc flour, these are also gluten free.

The basic ingredients are roasted peanuts, sugar, dulce de leche or condensed milk, and cassava or tapioca flour (though I’ve also seen recipes calling for biscuit crumbs or bread crumbs, which obviously may not be GF).

I have wanted to make Brazilian peanut candies for a while. But, we never seem to have peanuts in the house, instead we are always overrun by cashews, almonds or walnuts. So, this candy had a makeover in the kitchen and emerged as not-quite-Brazilian cashew candies.

Roasted cashews replaced peanuts, nutella plus a spoonful of honey replaced dulce de leche, and we were ready to whiz and roll.

And that’s all the steps it took – whiz in the food processor, and roll (or mould) the candies. I don’t think I’ve encountered an easier recipe before. The only note is the mixture seems to come together much more easily (so that it can be rolled into balls or pressed into moulds) when it’s made in the food processor, compared to being made in the traditional mortar and pestle.

I’ve seen pictures of the paçoca shaped like a log that is cut into sections, or pressed into a tray and then cut into squares. Instead of these traditional shapes, this was an opportunity for me to test out some miniature cookie cutters as candy moulds. I also sprinkled coconut powder and flaky chocolate over everything for an unexpectedly Christmas-y aesthetic. I think you could drizzle melted chocolate over these and that would be delicious too.

If you want the traditional recipe with peanuts, they are at the end of this post.

And before we eat it all of these candies, I’m bringing them to Angie’s Fiesta Friday 18, hosted by Mr Fitz@Cooking with Mr Fitz and Justine@Eclectic odds n sods. 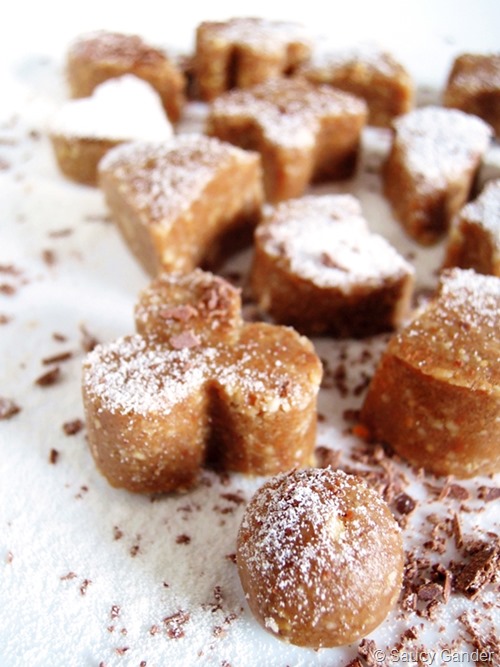 Not quite Paçoca or cashew & nutella candies

1. In a food processor, whiz the cashews, sugar and tapioca flour together until very finely ground. Add salt, nutella and honey and whiz in the food processor until mixed thoroughly and the mixture stays in shape when pressed into a ball or other shape.

2. Press small amounts of the mixture into mini cookie cutters as though they are moulds, press down firmly on a plate or chopping board, before pushing the mixture through the cookie cutter so that it is unmoulded and retains its shape. Repeat.

3. Optionally, sprinkle the candies with coconut powder and chocolate flakes.

For the real Brazilian thing:

Peanut paçoca from Flavours of Brazil

10 minute pacoquinha from Not Quite Nigella

41 thoughts on “Not quite World Cup: cashew & nutella candies”