A train, a monkey and a fiesta

This was one of those weeks. Catching the cold that is sweeping through city offices. Photos disappearing from the SD card (huh?). Scheduling this post to publish on Friday 15th rather than Friday 8th (huh??).

Belatedly, may I present some photos from Myanmar (Burma), as I dash over to take up my duties as co-hostess of this week’s Fiesta Friday. My co-host Margot @ Gather and Graze has been there for hours, pouring out her signature Dame Edna cocktail, and generally being wonderful. Think of Margot as your on-time, organised, gracious chatelaine. And me as the sitcom-style comic relief (“icing sugar!” “monkeys!” “photo disappearing trick!”).

Please come and join us, last week there was a flood of zucchinis and chocolate and a cat dressed up as a human as a cat. I can’t wait to see what this week’s party will bring.

Not many train lines in the world become attractions in their own right. One of them is the train over the Gorteik viaduct in Northern Myanmar (Burma). When it was built, was the largest railway trestle in the world, and has been described as one of the most beautiful train rides. It also featured in Paul Theroux’s book The Great Railway Bazaar.

The journey starts at 4am in Mandalay. It is 12-15 hours to get to the mountain village of Hsipaw, and several more hours to the end of the line in Lashio. (The same journey to Hsipaw is 5 hours by bus.)

We ambled, lurched, stopped, reversed, shuddered, lurched and even went forward! It was so bumpy in “ordinary class”, we may have been airborn. Something to do with narrow gauge tracks, and the train not fitting perfectly – gulp.

And, it was one of the highlights of my trip. Where else would you sit with a group of sleeping soldiers, with durians and clay pots under your feet….

… feel extremely brave as you lean out the door of the train, holding the handrail, to get the obligatory “we are going over the Viaduct!” photo? We comforted ourselves with the thought that, if we fell off, at least there would not be a slow lingering death …

… and catch the first glimpse of Hsipaw as you roll in, slightly battered, 15 hours later? 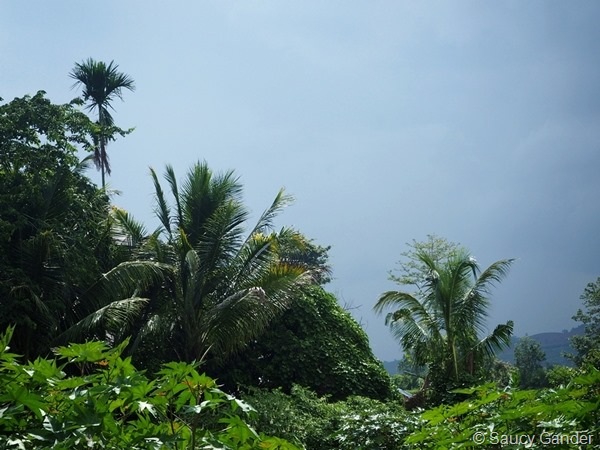 At the blink of an eye, this little fella can drop the wise-beyond-his-years pose and be tugging scarfs, cameras, food and drink bottles from hapless visitors. As you walk up the covered stairway at Mount Popa – all 700+ steps – the monkeys scamper around you, friendly, inquisitive, and mildly “eek” when they show you their canine teeth (“ok, you can have my water bottle, goooood monkey”). 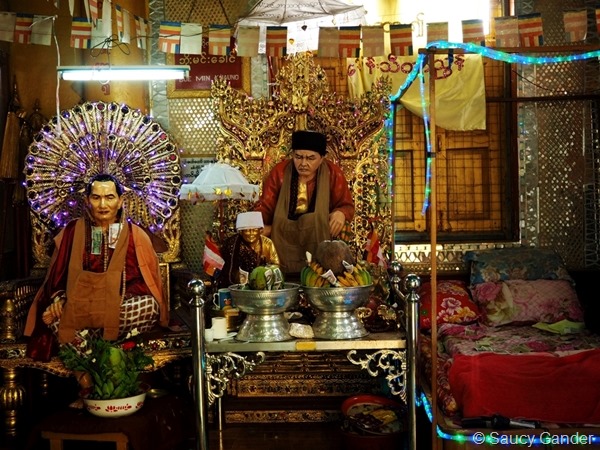 Mount Popa is a temple dedicated to nats – Burmese spirits – who can send good and bad things your way, and seem to get along with Buddha just fine. (I saw a few nat shrines within Buddhist temple courtyards)

Mount Popa temple complex sits on a striking, almost vertical hill, that just rises out of the ground about an hour’s drive out of hot, flat, dusty Bagan. As the car winds its way towards the hill, the air becomes cooler, the greenery greener, and the durians more ‘robust’ in smell. The covered stairway had nat shrines at every turn. We were outnumbered by school kids who raced each other, and the monkeys, up the stairs; and wondered what each of the nats could do.

And at the top of the hill, we – and the tribe of monkeys – were walking among clouds.

(I wonder if the monkeys have my missing photos?) 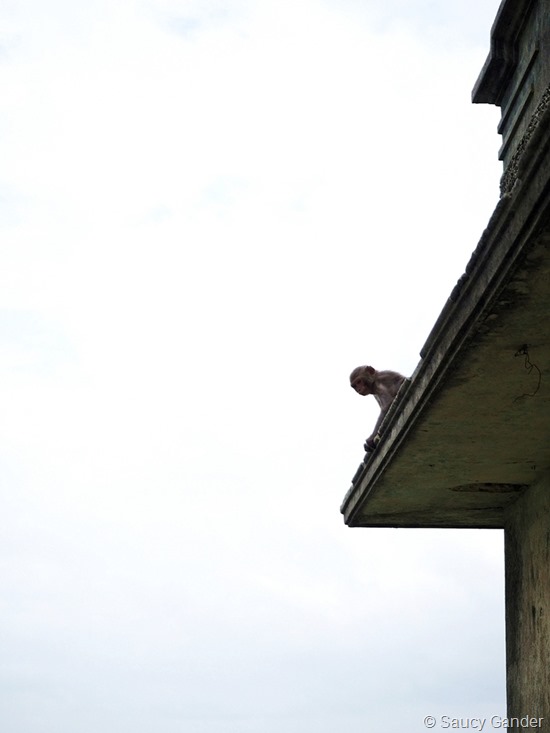 60 thoughts on “A train, a monkey and a fiesta”