A beachside Christmas, a recipe for spicy cranberries and raisins 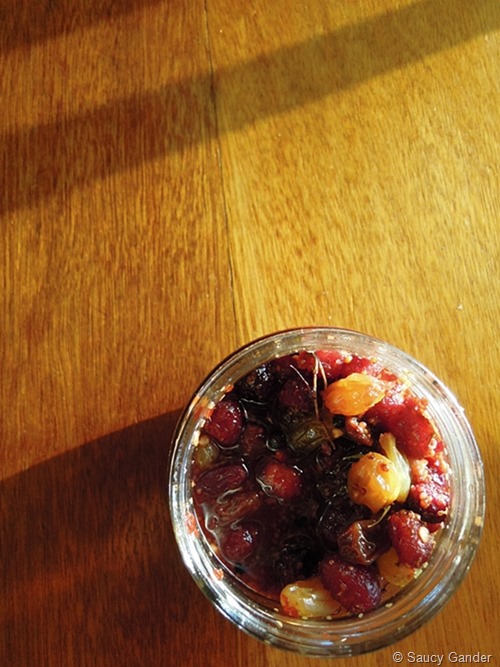 Christmas lunch has come and gone. Once again, I didn’t take photos during lunch, as I didn’t want to interrupt the festivities. This morning, I sat in a garden looking out over the ocean, in a white tee and white sun hat, writing down notes from the meal: what worked, what can be better next time.

I was peaceful, lulled into daydreams, detached from the comings and goings in the house, yet more aware, alert to the sounds and sights of nature around me. The sun was shining; turning the ocean shades of royal blue, deep sea blue, turquoise. The sun made dappled patterns through a tree. It was warm on my back, yet a sea breeze brushed across my notepad. The waves continually crashed on the rocks, again, and again. White clouds formed fantastical patterns on the edge of an equally blue unending sky.

Inside the house, guests talked about local traditions over tea and slices of Sri Lankan Christmas cake. Every year, the local fire brigade dresses up as Santa and his helpers, drives a fire truck to every local house and popular beaches, and gives out lollies to children (and the young at heart). It is one of my favourite part of Christmas on the South Coast – anyone can go to a shopping centre and have their photo taken with Santa, but how many have caught a bag of lollies from Santa standing on top of a big red fire truck?

Here is our Christmas lunch menu, which featured flavours from Sicily and Morocco rather than Ye Olde England. The recipe for spicy cranberries and raisins follows – halfway between a pickle and a chutney, a nod to tradition in an unorthodox Christmas meal. Recipes for a few other dishes will be posted over the next month or so.

END_OF_DOCUMENT_TOKEN_TO_BE_REPLACED

How could you say no to a bread loaf that someone has described as “basically a huge, yeasted, baked gnocchi”?

The recipe for this Tuesdays with Dorie (TWD) challenge calls for about equal amounts of mashed potatoes and flour, mixed with a small amount of the potato’s cooking water, yeast, olive oil. And after two quick rises, the bread is ready for the oven. Easy, right?

Except. I was baking in the Mr Gander Family beach hut, with a bare, holiday-house-kinda kitchen. It had a great view and gorgeous surroundings (see photos at the end of this post), but none of the baking accessories that forms my comfort zone: kitchen mixer, measuring cups, measuring spoons, kitchen scales, baking stone, and our slightly quirky but familiar oven. Instead, I made the rustic potato loaf with a large salad bowl, an old wooden spoon and by eyeballing the ingredients. It went something like this:

Probably because of the eyeballing, and the use of undesirable waxy potatoes, the potato loaf dough never quite came together into a satiny elastic ball as I expected. Instead, it looked like ciabatta dough’s cousin thrice removed: wet and shaggy, sticky, consequently a bit difficult to knead and shape; but also rises beautifully, with some irregularities in the moist, open crumb.

On a whim, I added rosemary from the garden, some whole fennel seeds, and a tiny bit of cracked pepper.

There was so much that could have gone wrong with this baking venture. I was unconsciously holding my breath until the bread came out of the oven. And – the bread loaves actually rose and browned in the oven! And most of them were eaten for dinner (before I took a photo). And the left over bread were made into toast the next morning (when I was ready to hover with the camera). 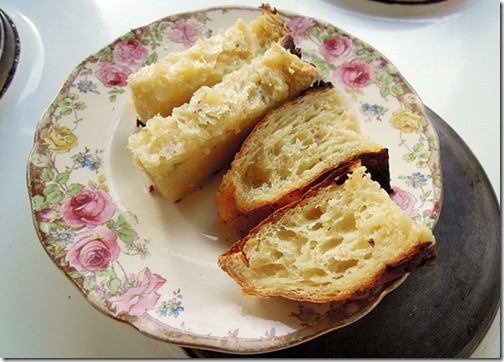 I made two batches of potato loaves, each with slightly different baking times and temperatures. One turned out more like the ‘classic’ rustic potato loaf. The other turned into a kind of hybrid gnocchi-bread. Surprisingly, the gnocchi-bread was the preferred bread for a few of the Gander clan. Hmm…gotta love the in-laws !?

END_OF_DOCUMENT_TOKEN_TO_BE_REPLACED

I like to improvise in savoury cooking. A common dinner menu in our house is “[insert ingredient] surprise”. But in baking, I am a stickler for rules and always stay faithful to the recipes’ main ingredients and dry/wet ratio.

I started to make cookies for friends who were visiting on the weekend, only to realise we had run out of eggs.

On the spur of the moment, I improvised wildly. Into the mixing bowl went honey, polenta and quinoa flour, as well as plain flour and butter. Crushed lavender flowers were folded into half of the cookie dough (this post on Food and Forage Hebrides recently reminded me that I have wanted to bake with lavender for a while). Finely chopped rosemary leaves went into the other half.

The lush buttery butter now forms the backdrop to a more complex set of flavours. Quinoa and polenta added a full bodied whole grain taste. Honey left its lingering sweetness in the back of the mouth. For the lavender cookies, the flower buds also gave a clean, herbal-floral scent and taste. Each bite was like a spring morning on a country homestead.

END_OF_DOCUMENT_TOKEN_TO_BE_REPLACED

Focaccia brings back bad memories of suburban sandwich shops: dry, flat squares of bread, topped with desiccated bits of herbs and with a dense crumb. Or dry, thick-bottomed things, smothered in greasy ‘Italianate’ toppings like ham and cheese.

Nancy Silverton’s quip about bad focaccia sums it up well:

Here in Los Angeles, those dense, cake-like squares of dry, flavorless bread, topped with rosemary if you were lucky, always seemed like a bad cliché — something Italian American restaurants offered for their bread service as a way to appear authentic or simply to stick with a theme.

Since then, I’ve encountered another kind of focaccia from real bakeries: thinner, simpler, with deeper uneven dents made by the baker’s fingers (or the apprentice’s).

I began this week’s Tuesdays with Dorie (TWD) focaccia wondering which type of focaccia will come out of the oven. I needn’t have worried. This recipe and I are going to be good friends; actually, my friends and this recipe have become good friends.

After the initial kneading, and during the 36 hour rest, the dough ballooned and coyly promised fabulous thing. Fresh from the oven, it delivered on that promise: we inhaled lightly crusty, pillowy, chewy bread.

Since I can’t help tweaking recipes, I tried a few sweet and savoury toppings. Each one worked well and showed off the bread’s versatility. 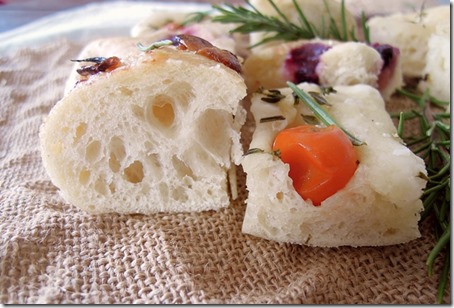