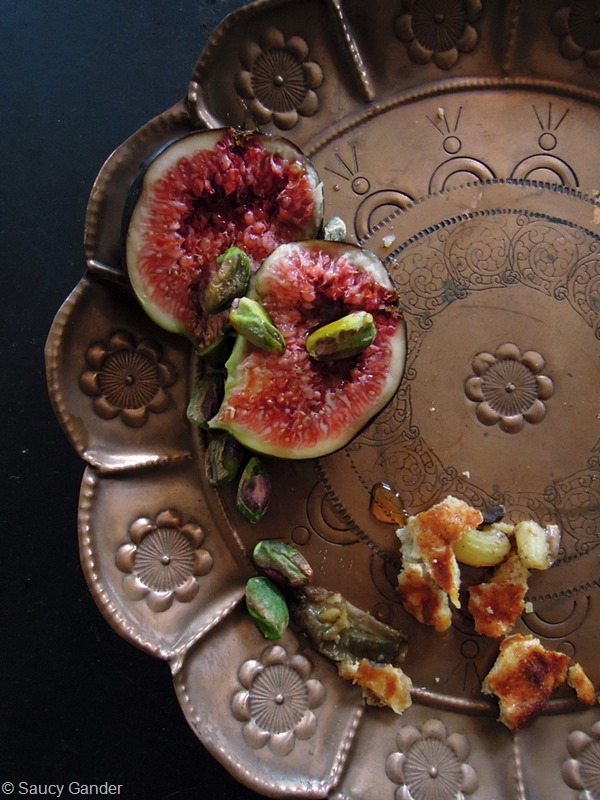 Recently, work has been intense, crazy-good-intense, plus I have been cooking for friends: lingering, laughing, food-laden, wine-tinted dinners where people meet old friends and make new ones. All of which means I’m catching up on the blogosphere this weekend.

The good thing about cooking for a bunch of friendly guinea pigs friends is that I can foist “out there” dishes on them. And unlike a family Christmas lunch, I run less risk of offending the mother-in-law-of-cousin-in-law.

Dishes like a macaroni pie from the novel The Leopard (Il Gattopardo), by Giuseppe Tomasi di Lampedusa. 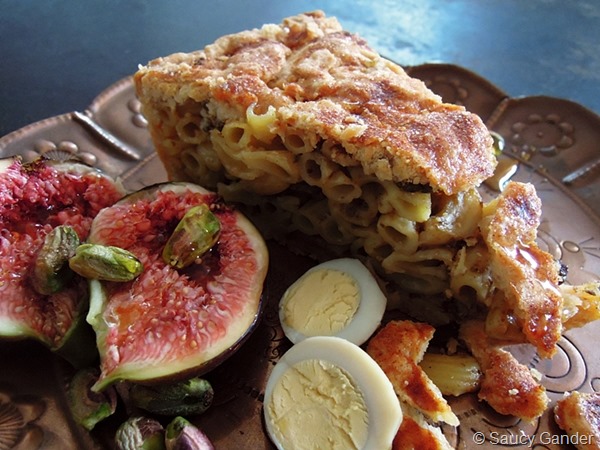 Like the Triumph of Gluttony, the idea of the pie has haunted my imagination since I read the book years ago:

“When three lackeys in green, gold and powder entered, each holding a great silver dish containing a towering macaroni pie, only four of the twenty at table avoided showing pleased surprise.

Good manners apart, though, the aspect of those monumental dishes of macaroni was worthy of the quivers of admiration they evoked. The burnished gold of the crusts, the fragrance of the sugar and cinnamon they exuded, were but preludes to the delights released from the interior when the knife broke the crust; first came a spice-laden haze, then chicken livers, hard boiled eggs, sliced ham, chicken and truffles in masses of piping hot, glistening macaroni to which the meat juice gave an exquisite hue of suede.”

Yes, another dish from a book, another Sicilian recipe. Must be something in the water there.

It turns out – unlike the triumph of gluttony – other people have had the same idea and have shared recipes for that pie of dreams. Although Ms Taylor Simeti thought the passage from the Leopard is ‘perhaps the summa of an ancient [Sicilian baronial cuisine] tradition rather than the product of a single recipe’ (in Sicilian Food: Recipes from Italy’s Abundant Isle), both she and Ms Anna Pomar gave recipes for timballo bianco that come close to recreating that masterpiece of nostalgia. I have made the pie, or timballo, a few times now (a rare thing in our household) for dinner parties, family Christmas lunch, and a New Years Eve potluck.

Mostly, people are intrigued by the idea of a macaroni pie, then wowed by the flavours and smells. Once, someone said it reminded them of an old, old Lebanese dish made by their grandparents, which now has me looking for old Lebanese cookbooks that go beyond flat bread, fatteh and kibbeh – if anyone knows a likely one please tell me?

All that time, I never got a photo of the pie! The pie comes out of the oven, onto the table, a flurry of carving, plating, eating, and we are left with an empty tin. Until last Saturday, when I made sure to save a (small!) slice of the pie for photos. And finally (finally!), I can share this with you.

I still don’t have a photo of the whole pie. So, imagine, a large dome of browned and patterned pastry, preceded by the waft of sugary cinnamon, a heady mix of savoury and dessert-sweet like the description in the book. The pastry almost shatters to release a rich, savoury smell laden with porcini mushrooms. Then the macaroni, quail eggs and other fillings, spilling out of the thin, crisp crust and tumbling onto your plate. All the while, that blissful smell of porcini mushrooms. 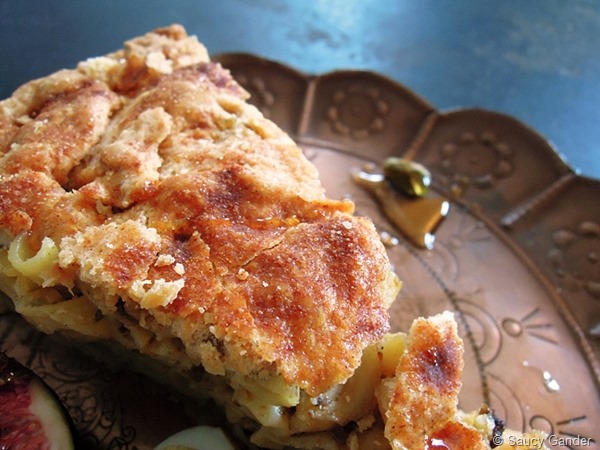 We don’t have the traditional bronze pie dishes that gives you the proper domed shape in the pie. Its entrance into a room carried by a liveried footman would be so, so spectacular. Instead I use the biggest quiche tin we have, remove it from the tin and present the quiche-pie-timballo with as much non-liveried flair as I can summon.

This recipe from Ferrara uses pigeon meat, pork and beef to make a ragu. The recipes by Anna Pomar and Mary Taylor Simeti use chicken liver (and other ‘bits’ if you can get your hands on them). The Leopard talks about chicken and liver, so I’ve made the livered version – chopped up into small pieces, it doesn’t turn into “mmm liver pie”; instead, it’s more of a final savoury note, an extra meaty idea, that enriches the buttery, parmesan-rich sauce, and rounds out the mushrooms, eggs and pasta.

Also, the descriptions and Ms Taylor Simeti’s recipe asks for the unlaid eggs of hens (! – !?). I’ve seen them, once – an unlikely incident from a childhood in China. Egg yolks are good substitutes, but I prefer to use the smaller quail eggs, as they mix with the other filling ingredients better.

As a fitting follow up to the Sicilian cocktail party, I’m bringing this imagined pie to a virtual fiesta – Angie’s one and only Fiesta Friday.

If you are curious about The Leopard, Sicilian history and food, and Tomasi Lampedusa himself, find a quiet corner and read this. 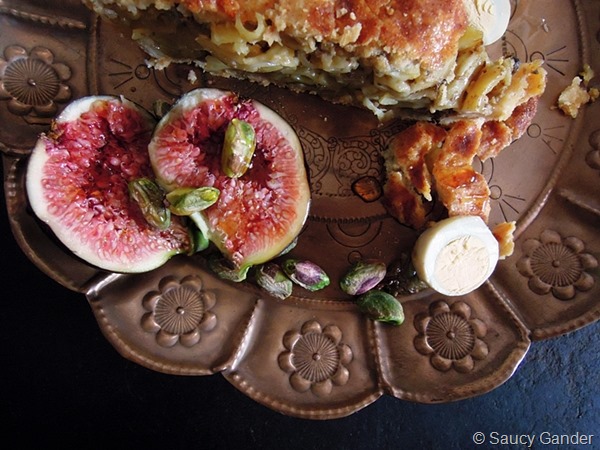 425g / 15oz flour (to get the same effect as ‘soft’ flour, I mix about 25 grams of cornflour with 400 grams of flour)
2 tbsp sugar (I use castor or granulated sugar)
Pinch of salt
125g / 14oz cup unsalted butter
75g / 3oz lard (I use good quality leaf lard from a butcher, but I think you can sub vegetable shortening or maybe even margarine)
1 whole egg plus 1 egg yolk, at room temperature
125ml / 4 fl oz white wine (I’ve used all kinds of white wine, ranging from sweet to very dry, all have turned out well)

1. Filling: Put the muhrooms to soak in hot water for 2 hours.

2. Pastry: Sift together the flour (plus cornflour), sugar, and salt, cutting in the butter and lard until you get a coarse, lumpy texture. Don’t overmix, the lumpy bits will make the pastry ‘short’ or crispy/crumbly.

3. Stir in the egg and yolk. Add just enough wine to bring the dough together. I start with less wine than I think I need, keep pushing the bits of dough together until they start to form a ball, and add more wine if the dough is dry. The dough should be soft and malleable, softer than play dough.

4. Work the dough for a minute (I just keep pushing the bits of dough together, then knead it a couple of times to ensure the ball stays together). Shape into a ball, refrigerate at least an hour.

5. Filling: Wash the livers and other chicken bits. Cut them into smallish pieces. Saute the onion in the olive oil until soft, stir in the tomato sauce. Turn up the heat, add the livers. Brown on all sides, stir constantly. Then add the white wine, bring to a boil and reduce.

6. When the wine is well reduced, add the mushrooms and the water they soaked in. Add salt and pepper to taste. Bring to the boiling point, turn down the heat and simmer for 30 minutes. Stir through 50 grams of butter, keep stirring until it has melted. The filling may be made up to one day ahead until this point.

7. Cook the pasta in plenty of salted boiling water, until just barely al dente. Drain well, put in a large bowl, and add the remaining 50 grams of butter, the chicken-liver-and-mushroom sauce, the grated cheese, the diced ham. Mix well, and add salt or pepper if needed.

8. Assemble the pie: Divide the pastry into two pieces, one slightly larger than the other. Roll out the larger piece to a circle wide enough to line a large pie dish. Fill the pie base with the pasta mixture.

9. Roll out the remaining dough and place it as a lid over the pasta. Seal the edges, decorate the upper crust with scraps of pastry, poke vents in the lid, and brush with a beaten egg white.

57 thoughts on “An imagined pie, lost splendours and a Sicilian timballo (macaroni pie)”