“Come to the fiesta!” chana masala 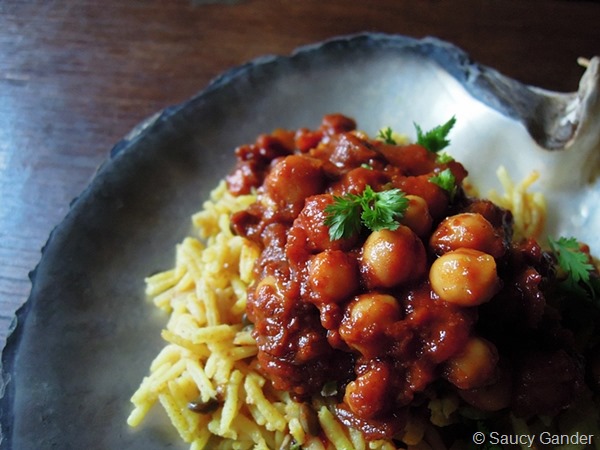 This little blog has seen many parties – real and imagined – pass through its virtual doors. I’ve occasionally talked about dinner parties at Casa Gander. I’ve planned a middle eastern tent feast with Laura of Laura’s Mess (and she has done it, wow!). I’ve even gatecrashed a Sicilian cocktail party with Liz of Food for Fun.

This time, I’m co-hosting Fiesta Friday at Angie’s place (of the Novice Gardener) with Sir Johnny (of Kitschnflavours and Flours n Dainty Buns).

If you haven’t met Angie yet, you should – she is fun, witty, her blog is full of creative food ideas, she gardens and forages and makes the prettiest things from the foraged bounty. And Sir Johnny? – I can’t wait to see what he will wear, having come to previous Fiestas in fisherman’s waders, a black PVC ensemble, that magenta onsie with a white zip, and – it was rumoured – a chamois.

As for this week’s Fiesta, get ready for madcap party tricks when you least expect – Sir Johnny and I are both in crazy time zones compared to State-side friends, so when you are blinking at the rising sun, we’ll be just getting the disco lights and cocktails started.

Fiesta Friday celebrates that best of weekdays with the funnest of parties. Please, please, come and join the party! Visit the Fiesta-goers’ posts, even better link up your own post! We may be rowdy, but we are a friendly bunch and always looking out for more people to share the fun. It’s a great way to get more people visiting your blog, and I’ve met some talented bloggers along the way. Have I convinced you yet? (actually, can you tell I’m not a salesperson??) 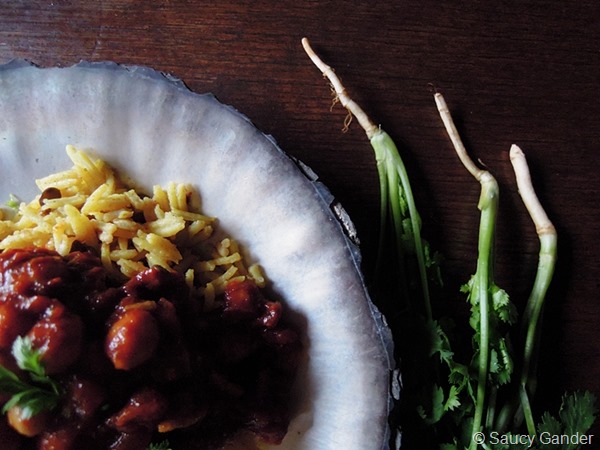 And onto the food! This week, I’m bringing to Fiesta Friday a bowl of chana masala (or chole masala), a chickpea dish that is found in Indian and Pakistan cuisine. According to Sir Google, a popular version of chana masala comes from Punjabi cuisine, and has a distinctive sour and tangy flavour. There are also south Indian versions such as one from Kerala, and a version with black chickpeas.

I made the Punjabi chana masala, which has been popularised by Madhur Jaffrey (including via Smitten Kitchen). This was one of the most flavoursome and fragrant dishes I’ve ever made, and it looks like you’ve slaved over a stove for positively hours – when in fact it’s quick enough for a weeknight meal. Low fuss & high impact = win win.

END_OF_DOCUMENT_TOKEN_TO_BE_REPLACED

This is just to say, I have eaten the savoury plum tart

We are not romantic people, Mr Gander and I. You will not find a bunch of roses on my desk on a certain February morning (dark chocolate is a totally different matter).

Yet, we buy each other little gifts any time of the year. We hold hands in the street. We laugh at each other’s silliness, but are also considerate, even sweet.

Maybe the first sentence should be, we are not conventionally romantic, pink hearts and teddy bears kind of people. Instead it is the kind of affection that goes ‘to the level of every day’s / Most quiet need, by sun and candle-light.’ (Elizabeth Barrett Browning) 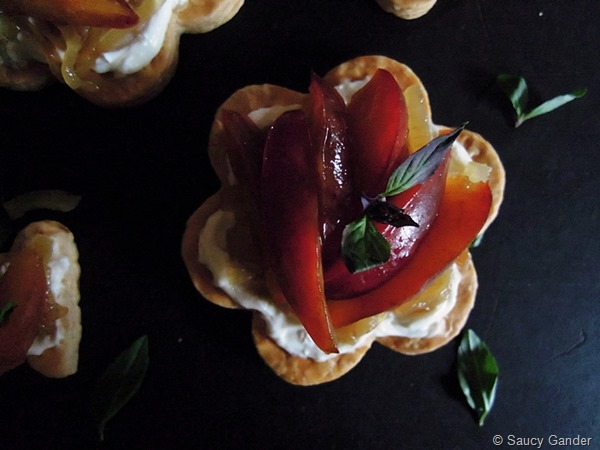 Which brings me to this savour plum tart. It won’t leave you in a sugar coma. It is savoury, creamy, the caramelised onions setting off sweetness from the plum slices and the crispy tart shell – all of which makes the tart well worth savouring slowly.

It is equally graceful with warm caramelised onions and plums, or at room temperature when the slivers of basil comes to the fore. You will want to come back to this again. 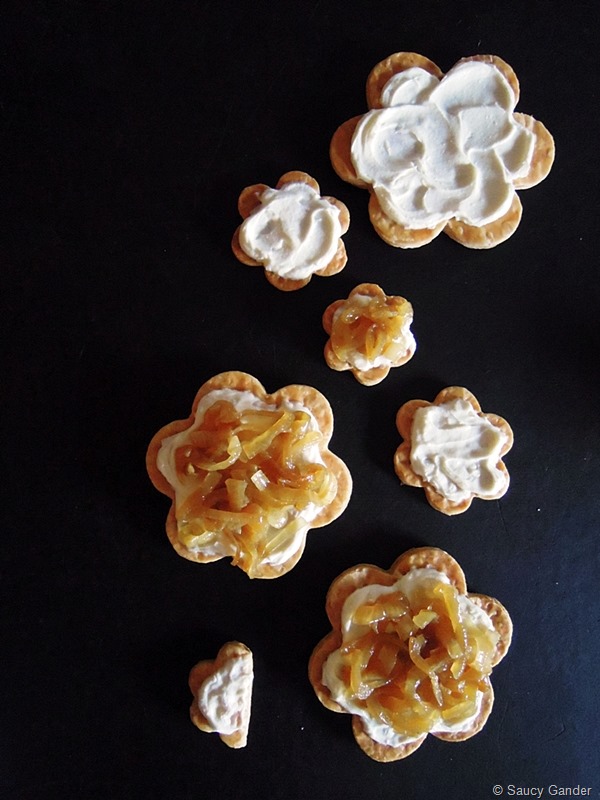 END_OF_DOCUMENT_TOKEN_TO_BE_REPLACED

I have something that I want to tell you about: a robot herding cows.

I knew some engineering students at uni, and one of them has been telling me about our university’s robotics research. Basically they are making robots that – one day – will be able to do all kinds of clever things by remote control or (gasp!) autonomously.

One of their experiments is cow herding with a robot called Shrimp. And it was picked up on Canadian TV, the BBC and lots of other media sites! I think Shrimp is kinda adorable, in the Wall-E style, and it looks like the cows just accepted that there’s a robot ushering them around – !! 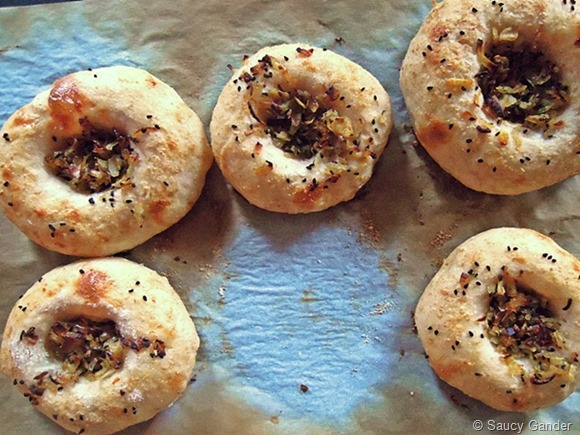 I digress from bialys. This bread seems about as far removed from cow herding robots as you can get. The stories about bialys are a little sad yet appealing to the romantic imagination. They look into the past, not into a robotics future.

Bialys, or bialystoker kuchen, comes from the city of Bialystok, Poland; it was part of Czarist Russia at one stage. Bialys look similar to the bagel, except it has an indent and not a hole, the indent is traditionally filled with an onion and poppyseed mixture, and it is baked without being boiled first.

Bialys seems to have been eaten at all meals by the Jewish people in Bialystok, but now is much less commonly found. Some stories from people who have migrated to the US are here. Mimi Sheraton also wrote a book, The Bialy Eaters, The Story of a Bread and a Lost World.

(Mimi Sheraton’s book title made me think of the Lotus Eaters from Ulysses, except eating bialys in other parts of the world probably reminded people of home and Bialystok, not forgetful of it.)

END_OF_DOCUMENT_TOKEN_TO_BE_REPLACED 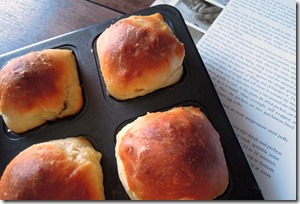 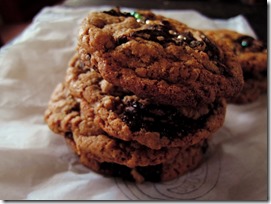 Can you believe it’s 30 years of Eurovision song contest?

Eurovision has a surprisingly large fan base in Australia, probably since we fell in love with ABBA way back when. These days, our multicultural broadcaster SBS despatches two commentators to the host city, dedicated to living, breathing, and relaying every sparkle, tassel, costume reveal, key change (intentional or otherwise) and pyrotechnics from the extravaganza. It’s almost like Tour de France season. We even got a mention from the presenter Petra Mede this year, *squeal*.

Some fans in Australia are pretty seriously committed. A previous Australian commentator got in trouble with some fans when he made fun of the show. (Really? They don’t find it mesmerising-funny that Cesar from Romania was channeling Dracula, and then broke out in a magnificent falsetto?)

On Sunday night, when Eurovision was broadcast on Australian TV, we were at an Eurovision party dressed up to the crazy nines. I was dressed as one of the Russian grandmothers or babushkas from last year. Anyone remember them? They brought out trays of cookies from an oven while singing on stage! My costume of course included a tray of freshly baked cookies – food as costume, wowza.

It’s not a proper Eurovision party without a smorgasbord of dishes from the contestant countries. Someone brought Portuguese chicken, which was technically not permitted because Portugal didn’t enter this year’s contest, but we ate the chicken anyway. I had two food entries: savoury brioche pockets, which was this week’s Tuesdays with Dorie (TWD) assignment, and blinged up chocolate chip peanut butter cookies, which was part of my babushka costume.

END_OF_DOCUMENT_TOKEN_TO_BE_REPLACED

I have been looking at blogging projects that would prompt me to learn new baking skills and to bake on a regular basis – I’m conditioned by uni and work to meet external deadlines, however arbitrary. Tuesdays with Dorie, which is working through the book Baking with Julia, seemed a fun project to join. Et me voila.

I loved the dough, as did Mr Gander and his mother, and it worked well as both thick and thin pizza bases. The onion confit was a tasty though different take on pizza topping. Next time I would use a different (softer) style of red wine, or tweak the recipe a little. My notes on the recipes and tweaks are below, for full recipe please go to The Boy Can Bake or see page 159 of Baking with Julia by Dorie Greenspan.

END_OF_DOCUMENT_TOKEN_TO_BE_REPLACED

The man placed a chipped plate with slices of red onions next to the bowl of fried fish. No dressing. Since man (and woman) cannot live on fish alone, I shrugged and ate a slice of onion.

Then I ate another. And another.

The onion had …. taste. Not just whatever makes your eyes water, but real flavours that come from slow traditional farming. It was peppery sharp, a bit sweet (it would have made the best caramelised onion), and what I can only describe as a concentrated savoury onion-ness that made each slice a thing to savour.

Sitting by the shores of Lake Nasser, in Abu Simbel, Egypt we had one of the simplest meals on our six week trip around the Middle East, but we still remember the onions today. Its sharpness cut the slightly muddy lake fish (the fish was so fresh, it could have jumped right out of the lake onto our plate, or at least, into the frying pan). It livened up the wholemeal flat bread. The flavours were bright, like the colours of the sun, the lake and the desert.

I looked around the large, dusty backyard of the house that was our eatery, and wondered if the onions were grown there. The kitchen, just inside the darkened doorway, looked like a domestic kitchen. Another corner of the yard had a large-ish thing that looked like a barbecue to my Australian eye. As I watched, a few men began to gather around and light a fire. Maybe there was going to be a roast of some kind tonight? The faded metal sign over the entrance to the eatery, Queen Nefertari (I think? It was definitely Queen something) will probably be lit up, and dimly vie with the Abu Simbel light show a long-ish walk away.

Most people come to Abu Simbel as part of a day trip, in a bus convoy, on a plane, or as the beginning or end of their Lake cruise.

We gave ourselves two days in this town, and after the cruises and convoys left in the afternoon, we felt as though we were the only tourists in the place. (It wasn’t true, but most of the other tourists were probably back in the hotel complex. As far as we could see, the four star sprawling complex was also Abu Simbel’s only hotel. Its jungle style sumptuous decor is a world away from the dry, dusty, hut-houses and concrete in the rest of the town.)

After lunch, we walked around the dusty streets. It was winter, the temperature was about 30°C, and some of the men wore thick jumpers or puffy jackets. I guess it was a lot colder than the summer temperatures of 50°C. Some kids and men were tall, long limbed and walked with a jazzy kind of step. Their faces and clothes somehow said Africa rather than lower Nile/Egypt. And no wonder, the sleepy little town of Abu Simbel is a bare 40 kms from the Sudan border.

Out of sheer laziness we ate our pre paid dinner in the hotel that evening. We had one of those inevitable buffets in the over-ornamented restaurant. Even though I managed to talk to the pastry chef about basboussa, dinner couldn’t hold a candle to the simple dish of onions and fried lake fish.

Back in the comforts of middle class Sydney, we buy organic onions from the markets, but somehow it is not quite the same. A colleague is traveling to Abu Simbel in December, maybe he can take time out from his convoy and find the Queen Nefertari eatery for me, and ask for that plate of onions and the bowl of lake fish.