I have been looking at blogging projects that would prompt me to learn new baking skills and to bake on a regular basis – I’m conditioned by uni and work to meet external deadlines, however arbitrary. Tuesdays with Dorie, which is working through the book Baking with Julia, seemed a fun project to join. Et me voila.

I loved the dough, as did Mr Gander and his mother, and it worked well as both thick and thin pizza bases. The onion confit was a tasty though different take on pizza topping. Next time I would use a different (softer) style of red wine, or tweak the recipe a little. My notes on the recipes and tweaks are below, for full recipe please go to The Boy Can Bake or see page 159 of Baking with Julia by Dorie Greenspan.

The pizza dough was lovely: lightly crusty on the outside, soft and ‘toothsome’ on the inside, with an even, small crumb. It had enough flavour to be unobtrusively tasty.

The dough was made using a sponge, like biga for ciabatta and pate fermentee which I’ve attempted before. On one of our hottest weekends this summer, the sponge became happily bubbling within a couple of hours. 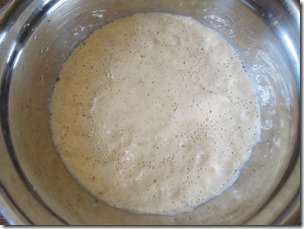 After kneading in my new Bosch kitchen mixer (thanks ‘Santa’!), the dough was off to rest, breath and prove in a lightly oiled bowl – like yoga for flour?

I made this dough twice over the weekend:

For the first attempt, I made the sponge, and then proved the final dough twice: after the dough had doubled in size, I punched down the dough to get rid of the large air bubbles (like bursting bubble wrap) and let it double in size again. The dough was smooth and silky, but I didn’t notice too much difference between the first and second risings. There was enough dough for three pizzas (roughly 20cm diameter, more or less) with thicker, traditional style bases.

For the second attempt, I reduced the quantity of dough but followed the recipe more faithfully, and turned the dough into thinner pizza bases. There was enough for two pizzas. I baked first pizza for 7 minutes and the second for 10 minutes. 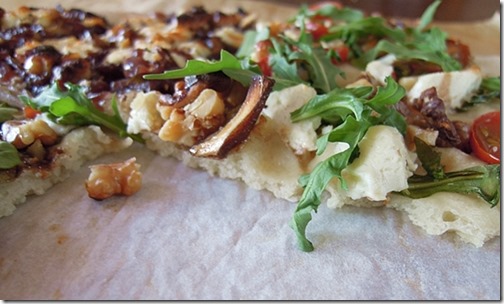 On balance, I prefer a thin and crispy base (baked for 10 minutes), which was closest to the Neapolitan style pizzas that have become the norm in many Sydney pizzerias. Mr Gander’s mum preferred the thicker base, as it was ‘substantial, but very easy to eat’. In the future, I would like to play around with thickness, and baking times, to get a consistent crispy-toothsome crust.

Note: I don’t have a pizza peel. The workaround is to make pizza bases on pieces of baking paper, and put the baking paper onto the pizza stone. Since the dough does not sit directly on the stone, it will not be charred on the bottom, but will still form a good crust from the baking stone’s intense heat coming through the baking paper. (Maybe Chinese new year will bring a bigger pizza stone and a peel?)

I used three lots of toppings:

I learned it is important to take the pizza out before the walnut is burnt; maybe a way to prevent burning is to put them under something – like cheese or onion confit.

I baked the pizza with half of the rocket, and scattered fresh rocket over the pizza when it came out of the oven. The balsamic reduction was a mixture of (supermarket grade) balsamic vinegar, raw sugar, thyme and garlic cooked down to a third of its original volume, until it became a thick, dark, glistening tart-and-sweet sauce.

Onion confit (confit d’oignon?) sounds so very French, I wondered about adding it to an Italian classic. Silly me. On one a hot evening, the sweet-sour confit was a welcome addition at dinner, and paired well with tangy-mild goat cheese and walnuts.

This is not your average caramelised onion. Thanks to the use of wine and vinegar, it was assertive, full-bodied, surprisingly savoury, in colour and taste. 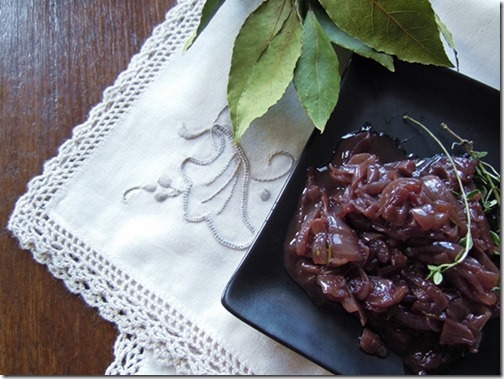 I only had two minor quibbles: the taste of cooked wine and vinegar were a tad overwhelming in the finished product. Also, mine turned out purple, rather than the mellow brown or red of onion marmalade I’ve seen elsewhere.

The taste is, I think, because I used a robust Australian shiraz with a relatively high alcohol content, whereas a softer red wine would have been truer to the original. I did not have blackcurrant liqueur the recipe calls for, so should have reduced the vinegar a little or added more sugar to compensate. A different type of red wine may change the colour of the confit as well.

These quibbles aside, it is still quite lovely, and the flavours mellowed after resting overnight in the fridge.

Cooking note: I cooked this in a copper pan instead of an open skillet, as I find it is easier to control the heat in the copper pan. I cooked the mixture uncovered for half of the time on medium-low heat so that the mixture cooked down as intended.

Using onion confit: this onion confit would make a good accompaniment to many things, including pungent cheese, strong flavoured meat such as duck, beef, goat (etc). For last night’s dinner, onion confit worked well with kangaroo steak and the rest of the balsamic reduction.

Photo: getting a decent photo of the onion confit was difficult. Limp soft purple onion does not a beautiful picture make (at least, I could not make it beautiful). In the end I went out and found a linen napkin from the local op shop and added a gratuitous branch of bay leaves. But, at least it was more photogenic than blue food!