A train, a monkey and a fiesta 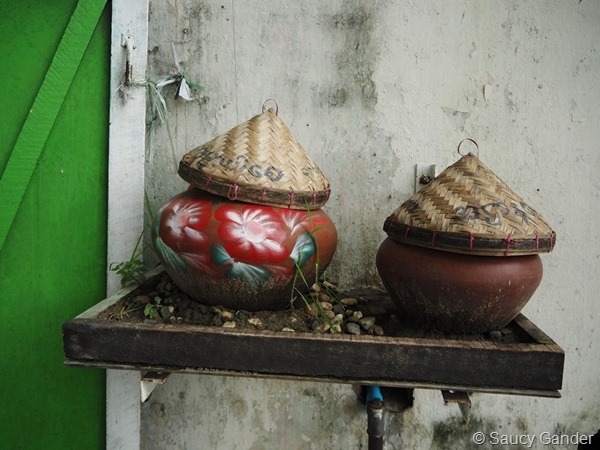 This was one of those weeks. Catching the cold that is sweeping through city offices. Photos disappearing from the SD card (huh?). Scheduling this post to publish on Friday 15th rather than Friday 8th (huh??).

Belatedly, may I present some photos from Myanmar (Burma), as I dash over to take up my duties as co-hostess of this week’s Fiesta Friday. My co-host Margot @ Gather and Graze has been there for hours, pouring out her signature Dame Edna cocktail, and generally being wonderful. Think of Margot as your on-time, organised, gracious chatelaine. And me as the sitcom-style comic relief (“icing sugar!” “monkeys!” “photo disappearing trick!”).

Please come and join us, last week there was a flood of zucchinis and chocolate and a cat dressed up as a human as a cat. I can’t wait to see what this week’s party will bring.

Not many train lines in the world become attractions in their own right. One of them is the train over the Gorteik viaduct in Northern Myanmar (Burma). When it was built, was the largest railway trestle in the world, and has been described as one of the most beautiful train rides. It also featured in Paul Theroux’s book The Great Railway Bazaar.

The journey starts at 4am in Mandalay. It is 12-15 hours to get to the mountain village of Hsipaw, and several more hours to the end of the line in Lashio. (The same journey to Hsipaw is 5 hours by bus.)

We ambled, lurched, stopped, reversed, shuddered, lurched and even went forward! It was so bumpy in “ordinary class”, we may have been airborn. Something to do with narrow gauge tracks, and the train not fitting perfectly – gulp.

And, it was one of the highlights of my trip. Where else would you sit with a group of sleeping soldiers, with durians and clay pots under your feet…. 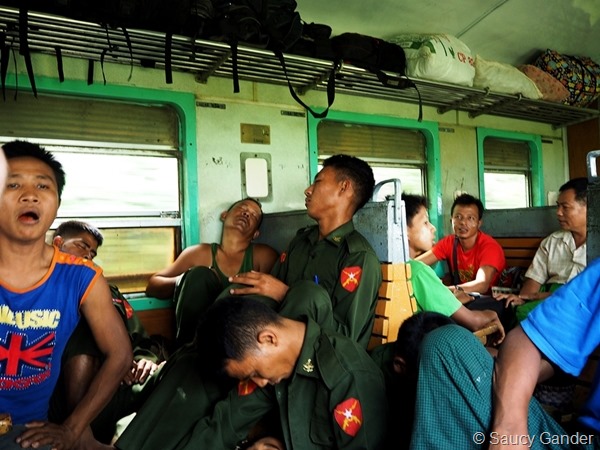 … feel extremely brave as you lean out the door of the train, holding the handrail, to get the obligatory “we are going over the Viaduct!” photo? We comforted ourselves with the thought that, if we fell off, at least there would not be a slow lingering death …

… and catch the first glimpse of Hsipaw as you roll in, slightly battered, 15 hours later? 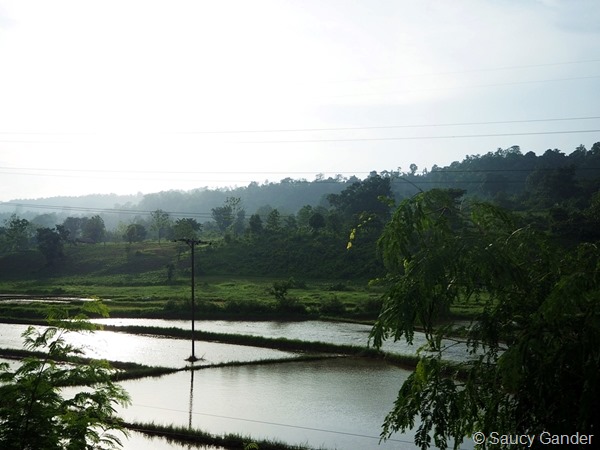 END_OF_DOCUMENT_TOKEN_TO_BE_REPLACED

Gazelle’s Horns and Fiesta Friday: a party with a sugary snowstorm

Out of your forehead branch and lyre climb,
and all your features pass in simile, through
the songs of love whose words, as light as rose-
petals…

The party starts at ten to three.
On the second floor, room twenty two
two co-hosts who had come down from Crewe were wondering just what to wear,
to the shindig going on down there.
They collided, both decided to put on Dame Edna frocks,
this was not a ‘do’ for cassocks or for smocks.

Fiesta, a SG travesty, with apologies to John Edward Smallshaw

This pastry is pretty, graceful, messy (if you add a snow of icing sugar as I did). Its names (for the variations of this pastry), in English, Arabic, French, are exotic, pretty, alluring: gazelle’s ankles, gazelle’s horns, kaab el ghazal, tcharek el ariane, tcharek el mssaker, cornes de gazelle.

I used a different recipe from the NYT archives, because it used far less butter in the pastry and avoided a late-night dash to the shop (and here’s a butter-less version). The NYT recipe probably produced a pastry that is less melt-in-your-mouth than Linda’s butter-ful one. Instead, the pastry was shattering-crisp, and scatters icing sugar in all directions when you bite into one.

Messy, and fun, especially at work with colleagues trying to protect silk blouses and ties from the sugary snow storm. 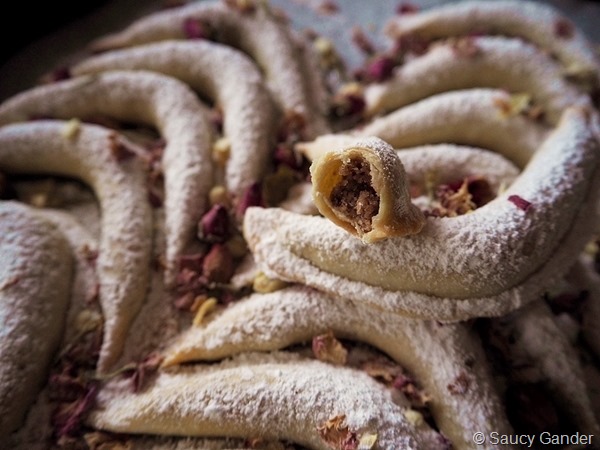 And a sugary snow storm always makes a party better, yes? That is why, as your Fiesta Friday host this week, I’m bringing a few trays of these pastries to crank up the party vibe a notch. If you haven’t been to a Fiesta yet, please do! It’s a lovely bunch of peeps that bring tantalising food, drinks, DIY, sausages, Harry Potter theme park photos, and lots of bloggy love.

Your co-host Margot and I, we’ve even dressed up for this party. Because the only thing better than a sugary snowstorm is a sugary snowstorm on fancy costume. Right my possums (and gazelles)? Ps, don’t you think Dame Edna’s glasses look a little bit like gazelle’s horns? Coincidence? I think not! 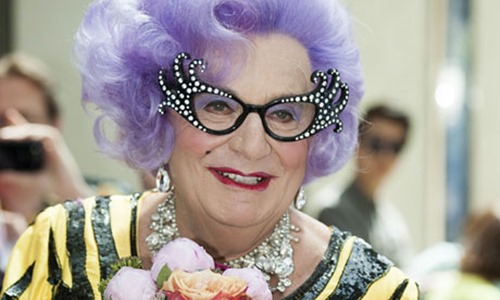 END_OF_DOCUMENT_TOKEN_TO_BE_REPLACED

My taxi wound its way through an endless arterial road. We were heading towards Yangon downtown. Whenever the car stopped, which was often, I fanned myself – in vain – with the city walking map I found at the airport.

I was travelling alone, going into a country that I knew almost nothing about. When we were flying into the airport, I looked out the window and saw rice paddies, with golden stupas (pagodas) that stood out for miles around. If I were a child, I would have held my breath from sheer excitement. I whispered to myself, I am looking at a Burmese stupa. I am in Myanmar. I am a traveller in Myanmar. Exotic, humid, colourful, unknown Myanmar.

The taxi wound its way past concrete walls inscribed with the curly, circular Burmese script. Past men and women wearing longyis. Past a school where girls and boys wore white shirts and green longyis. Past more people, fruit stalls, durians, traffic, and there was my hotel.

That afternoon was a jumble of noise and wires and food stalls and people and more moments of holding my breath – as I walk between street stalls, past more durians, into the traffic to cross the road. Streets of British colonial-era buildings, decaying before my eyes, fern and moss reclaiming them for the swamp that Yangon was built on. Footpaths covered by street stalls, pedestrians walking, fearless, slow and longyi-clad, on the road.

END_OF_DOCUMENT_TOKEN_TO_BE_REPLACED

Wanderlust: Myanmar and the people

You guys, you are awesome people. I’ve been away for what seems ages with the occasional peep, and you have still come to visit. I’m just starting to catch up on all that’s been happening in the bloggy space – as well as start a newish job. Watch out for me, soon.

And what a trip that was! The colours, sounds, smells, sights, the sensory overload. The derring-do of solo travel. And the sheer fun.

I’ve just packed away the suitcase, realised I’ve really lost my phone (sob – it had so many food photos on it), still trying to revive Patrick the Sourdough Starter, and sorted through those 2500 photos. Now, how do I start to talk about the trip?

Perhaps, we’ll start with the people. Locals and travellers, only a few caught on camera but many more remembered.

Like this guy, energetically looking after me and a German backpacker on an epic 14 hour train ride, who drives a truck between towns in Northern Myanmar and has a girlfriend in Yangon. This photo caught him in a rare non-chatty moment.

These women, one of whom offered us some jackfruit and laughed with me as I tried (and failed) to find legroom in between the luggage that filled all the space between the aisles and the seats.

END_OF_DOCUMENT_TOKEN_TO_BE_REPLACED

A writing process blog frolic, and a favourites list 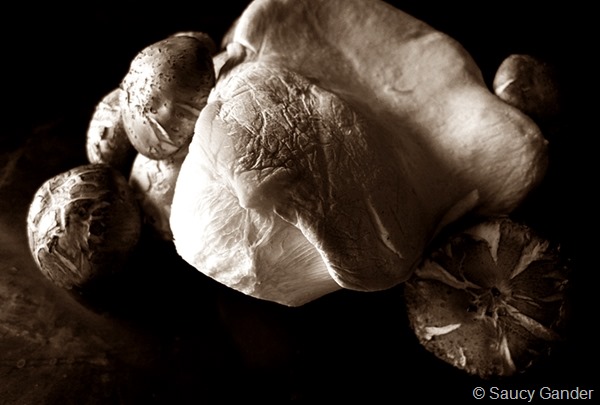 Every once in a while, a writing challenge comes along and makes my ears prick up. WP’s “Writing 101” series is one of them – I’ve been doodling along in private, occasionally scrunching up my nose at what comes out of the keyboard (would a quill and parchment make me write more thoughtfully? Or a typewriter?).

Another is the writing process blog tour that’s sprung up around the blogosphere. The lovely Petra @ Food Eat Love nominated me to be part of the blog tour. Have you visited her blog? Go on, I’ll be waiting here when you come back. It’s filled with delicious recipes and gorgeous photos. Most of all, a love of food and cooking really shines through, and isn’t that kind of energy and passion what blogging is about?

So here I am, doing the Tour with a little twist at the end (you didn’t expect a “straight” blog tour, did you?)… The rules are basically to acknowledge the person who nominated you, answer four questions about my blog writing style and process, and then nominate others to continue the Tour de Blogs – read on for my take on these rules – which has a list! Possibly the first list on this blog! 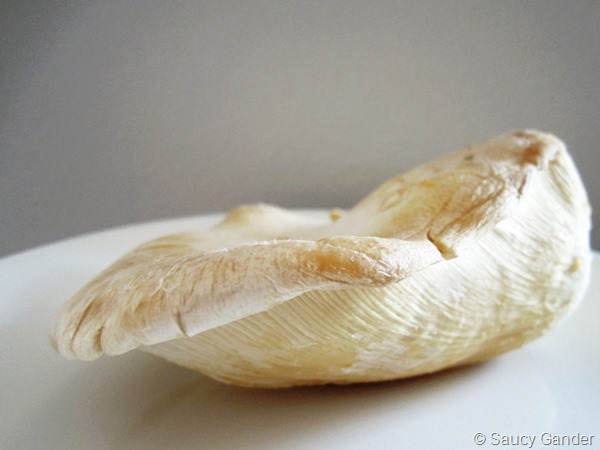 Also, here be unrelated photos of mushrooms – I found the bailin mushroom! Their firm, meaty texture have led people to use it as a vegetarian alternative to abalone. I think these are sold canned in some S-E Asian countries, but fresh ones are harder to find. A quick turn in rich chicken broth, a bed of garlic chives (barely wilted with a teensy bit of oil), bonito flakes and white sesame. And we had an impromptu star atop our daily rice. 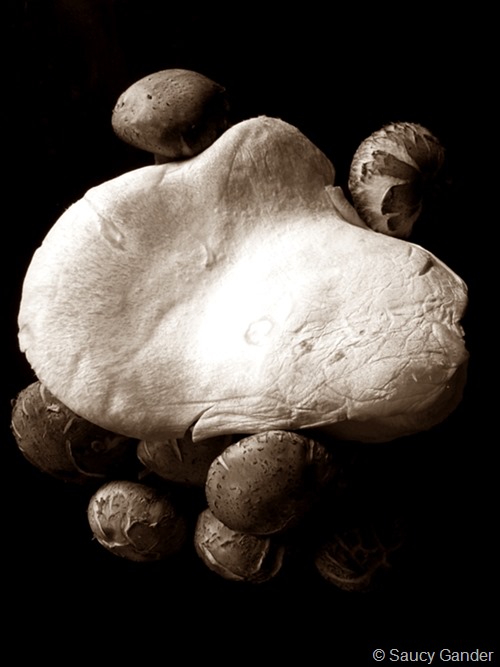 What am I working on?

Right at this moment, the Tour de Blog post! And this week, posts that can be scheduled to publish while I’m on holidays. Expect catch up travel photos, and a couple of easy peasy recipes.

Over time, the things I “work on” change according to the seasons and cookbooks and the bloggy universe. Sometimes, it is all about taming the Yeast Beast; or, it is about baking powder, baking soda, brown sugar vs granulated vs raw sugar. Summer is about that magical salad. During winter, it’s braises, anything with chilli, and that elusive perfect char siu.

What is constant is the idea that food is fun, unexpected, pretty, lumpen-ugly, frustrating, intriguing, but most of all fun. Cooking, baking, jam-making requires method, albeit leavened with a dose of madness. Madness? Call it madness or creativity or inspiration, or “je ne sais quoi”, it makes me want to pick up the camera and say “hey guys, look, I made stuff – !”