This recipe is not technically difficult, but is time consuming. It demands attention to detail at each step to bring out the best of its simple ingredients in a beautiful form. TWD pointed me to the episode of Baking with Julia in which chef Leslie Mackie makes the ‘perfect’ tart dough and this apple tart (here and here). Leslie’s low key manner made it seem like just another day in the family kitchen – which is how home baking should be.

I had two opportunities to make this tart, each time using different techniques (where the recipe offered options). Both times, the guests wowed over the tart’s good looks and taste; and I learned a little more about the art of pastry.

The apple topping gives French apple tart its elegant, decorative appearance. Apple slices are laid, overlapping, on a bed of apple purée to create a pattern of concentric circles or rosettes. I opted for the concentric circles, and created three circles around a ‘flower’ like centre.

In the video, Leslie Mackie suggested brushing the apple topping with extra melted butter halfway through baking. I did this for the second tart, which seemed to help the apple slices brown a little quicker. Though I still gave the tarts an extra 10-15 minutes in the oven for the apple slices to get browned edges. 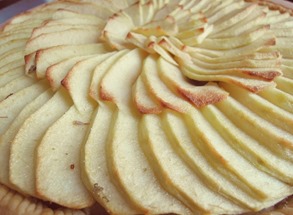 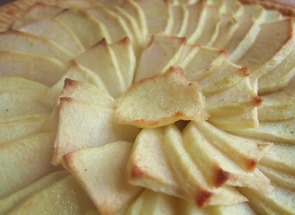 Some apple purées can be a bit ‘meh’. This apple filling was not one of those. Baked in an oven until the apples become soft enough to mash, this also concentrated the apple flavour. (Again, I needed to bake the granny smith apples for about 10 minutes longer than the recipe indicated.)

On its own, the apple purée was like a spoonful of autumn sun – and since I was putting a bunch of Australian native flowers into a vase that a friend made for us (how cool is that!), I used the autumnal-coloured cuttings as the setting for some of the photos.

For the second tart, I started to play around with the flavours. I dolloped dark chocolate (65%) onto the centre of the tart base, and spread raspberry jam to cover the rest of the base, before adding the apple purée. This gave us alternate spoonfuls of sweet-bitter chocolate and sweet-tart raspberries, each of which complemented the apple. Then I remembered a recipe for apple mosaic tart with salted carael on Smitten Kitchen, which gave me the idea of adding a layer of salted caramel instead of chocolate and raspberries – something for next time. 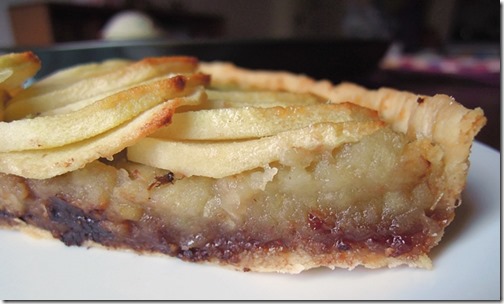 Pastry often seems like the supporting actor for the more glamorous tart or pie fillings. This pastry got our attention – two guests remarked on the lightness of the pastry and thought it was the best part of the tart.

This was easily the best tart pastry I have ever made, and can stand up to the pastry from my morning bakery. Fresh from the oven, it was light, flaky from the shortening, with enough butter to have that rich taste we love so well. While the dough was soft, it kept its decorated edge during blind baking to become a delicate, thin tart base. Also, the dough also didn’t shrink much even under my somewhat inexpert handling.

Since I made the tart twice, I tried two methods for making the pastry – in the kitchen mixer, and by hand using a pastry cutter.

Sadly (for my lazy half), the pastry cutter produced the superior result.

The kitchen mixer made the job easy, but the pastry cutter gave me that additional degree of control. I could really see the butter and shortening coming together with the flour, becoming a soft pliable dough after I added iced water. Perhaps once I become more familiar with the steps involved, it will be easier to get the same result using the kitchen mixer. 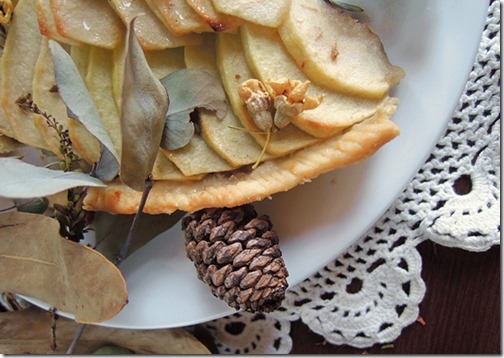 The recipe for this French apple tart can be found on the blog Laws of the Kitchen, and on pages 379-381 of Baking with Julia by Dorie Greenspan. To see how this tart turned out for other TWD bakers, go to Tuesdays with Dorie: Baking with Julia.

Anything else? Ahh yes. I baked the tart in a silicon tart pan. It does not have a removable base, and is floppy. I found out the hard way that it is impossible to lift a warm tart out of a floppy silicon pan, without ruining the pattern formed by apple slices. I think this is a good reason to invest in a metal tart pan (hurrah!).

42 thoughts on “So frenchy so chic: classic apple tart”