In an old house in Paris that was covered with vines,
Lived twelve little girls in two straight lines.
They left the house at half past nine … the smallest one was Madeline.

Tuesday 16 April was our next assignment for the Tuesdays with Dorie group. In place of a real entry, here is a post-processing enhanced and slightly tongue-in-cheek image of madeleines baked in non-madeleine pans. 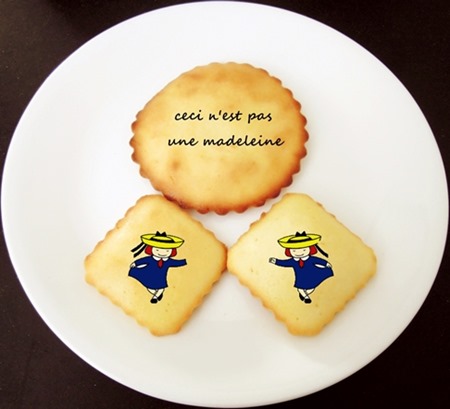 Work got in the way of a more thoughtful post about how to make this classic French cake-cookie. A quick search on the internet, however, revealed a range of fail-proof recipes and one contentious debate – whether baking powder should ‘even be in the same room with madeleines’ (Lebovitz, 2007).

I went with the recipe in the book Baking with Julia, which was a genoise batter without baking powder and enriched with egg yolks. It made a light, but slightly drier cookie-cake, with the requisite crispy, lightly golden edges. They tasted a little richer than cupcakes, and the addition of lemon zest made them bright, cheerful little things.

They almost walked in two straight lines. And the smallest one was almost called Madeline.

The recipe from Baking with Julia can be found at the blog Counter Dog. To see what other TWD bakers have done, please visit Tuesdays with Dorie.

In lieu of proper madeleines, here’s a buttery honey beer bread instead. Although Madeline and her friends are more likely to have eaten baguettes in their old Paris house covered with vines, I like to think this bread is hearty and homely enough to have occasionally graced their table too. 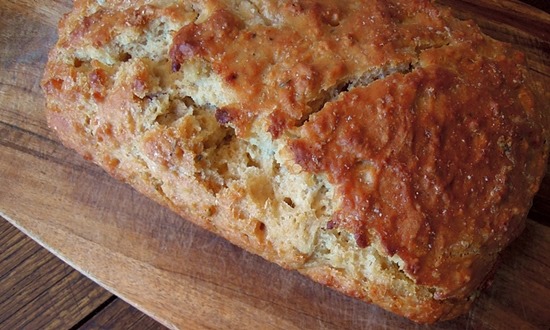 This bread came from the fabulous Brown Eyed Baker. I have made this twice so far, experimenting with the flavouring and mix of AP/plain and bread flours each time, and whether cold beer or room temperature beer (mmm, warm English ale, anyone?) yields a better result. Each time, the result has been a warm-from-the-oven, moist, flavoursome, intriguingly and faintly sweet bread to jazz up an impromptu dinner for guests.

My favourite part is melting a few tablespoons of butter, and drizzling it over the bread batter before putting the loaf pan into the oven. This technique yielded a rich, buttery crust, but left the beer and honey flavours to shine through in the rest of the loaf.

Here are my notes on the honey beer bread recipe:

Beer: use cold beer from the fridge, I think. When I used room temperature beer, the batter seemed to froth up much more, and the bread didn’t rise as evenly (the photo is from the second attempt).

Herbs and malt: add some, but not too many. Malt enhances the beery flavour, while rosemary, thyme, and lavender all enhanced the honey-sweetness. But all of them together is what I call too much of a good thing.

Flours: I used wholemeal flour, and also tried upping the amount of bread flour. Wholemeal added a heartiness that we liked, a lot. I don’t think an extra half cup of bread flour made much difference, though it could have been one of the culprits for the extra vigorous rise in the second loaf.

Serving: This bread goes well with savoury dishes, such as pork, but also makes a pleasant snack, especially when spread with butter and drizzled with honey. Maybe honey that has been scented with culinary lavender flowers. 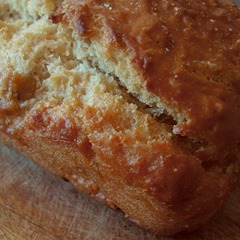 Optional: a tbsp of malt (such as powdered malt for flavouring milk), or herbs such as rosemary, thyme, lavender. Keep in mind lavender has a strong taste.

2. Whisk together the flours, sugar, baking powder, salt, and any optional herbs or other additions. Add the beer and honey and stir until combined. If you leave the mixture slightly lumpy, you will get a more rustic looking loaf; combine the mixture more thoroughly yields a more refined loaf.

3. Spread the batter in the greased loaf pan, even the top if needed. Drizzle the melted butter evenly over the top of the batter.

4. Bake until the loaf is golden brown and a skewer inserted into the center comes out clean. This took about 50 minutes in my oven with 350ml of liquid.

Serve: warm from the oven, the bread can be easily cut into thick slices and eaten straightaway (with mild risk of burnt finger tips). Cooled, the bread becomes easier to cut into thinner slices. It is best on the day it’s baked, but can be stored in an airtight container for 2-3 days. 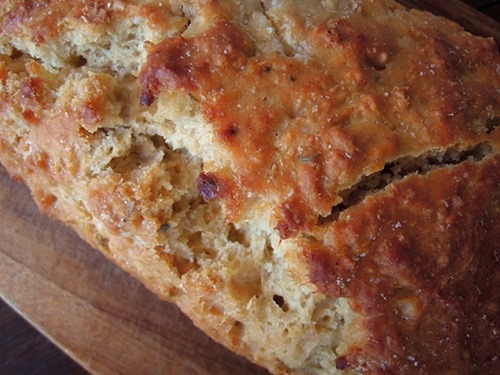