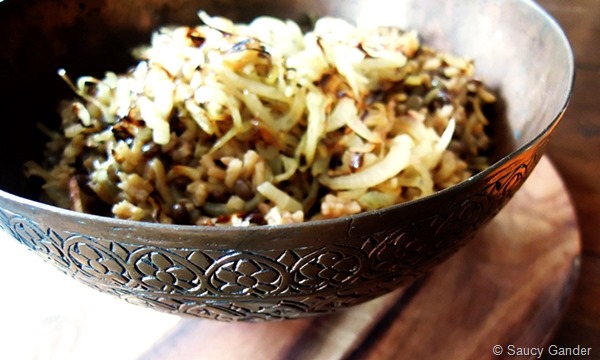 We had twelve people around our dinner table on Saturday night, with a menu – below – built around Paula Wolfert recipes. It was all about orange blossom water, cinnamon, saffron, mysterious peppers, and sugar. For one evening, we were in Northern Africa. Morocco.

There were dips scented with orange blossom water and cinnamon/thyme, hovering between dessert, salad and dips. Then, soup with gruyere and rye, home made stock, baked in a whole pumpkin, lightened with a touch of cinnamon.

The tagine was laden with cinnamon, saffron and turmeric. Slow-cooked lamb, onions slowly braised in the same liquid (Wolfert described the onion sauce as ‘unctuous’, so it was), finished under the grill with more cinnamon and sugar. It was aromatic, inviting, looked laden with history, and was magical. 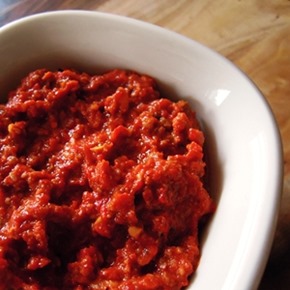 The mouhammara and a Berber bread stole the show.

Mouhammara, with the assertive flavours of pomegranate molasses, roasted capsicum (peppers), roasted chilli, thickened with walnuts, rounded out by the warmth of cumin. Everyone tasted, wondered, and asked for more. (Recipe at the end of the post)

And the Berber bread – made over 3 days, starting with a pungent garlic starter and ending with rounds of crusty, chewy-dense, savoury bread from the skillet – no oven! We kept tearing off chunks, burning our fingers and marvel that so much flavour could come from so few ingredients.

As for dessert? I made profiteroles, but all attention was on that cake – made by a friend’s mum who is a professional chef. It was the ultimate centrepiece – bigger than anything from a domestic cake pan, dense with liqueur and hazelnuts, covered with swirls of buttercream and chocolate.

Soup baked in a whole pumpkin, with rye bread and toasted gruyere

Couscous, with ghee, cinnamon and sugar

That Cake (which is just as good for breakfast)

Note: I’ve made this dip a few times, once using about 450 grams of store-bought grilled capsicums/peppers to save time. The store-bought capsicums was marinaded in oil, and I think some kind of vinegar/lemon juice, so even after rinsing the capsicums quickly, I only used 1 tbsp of olive oil, and did not think the dip needed additional lemon juice.

Wolfert says for best results, make this dip a day ahead. I agree, the flavours continue to meld together and improve over a couple of days, and the colours remain as vibrant as on day one.

2 1/2 lb (1.13 kg) red capsicum or red bell peppers
1 small hot chili, such as Fresno or hot Hungarian, or substitute Turkish red pepper paste to taste (I used a generic small red chili)
1 1/2 cups (about 6 oz or 170 grams) walnuts, coarsely ground
1/2 cup wheat crackers, crumbled (note I coarsely crumbled the wheat crackers, and then measured roughly half a cup)
1 tbsp lemon juice
2 tbsp pomegranate molasses or more to taste (I find I like to add another 1-2 tbsp of molasses, to get the sweet and tart flavours to shine through)
1/2 tsp ground cumin (I use about 1 tsp)
3/4 tsp salt (I used sea salt, rather than table salt)
1/2 tsp sugar
2 tbsp olive oil

1. Roast the red capsicums/bell peppers and the chili either over coals or a gas burner or under an electric broiler, turning frequently until blackened and blistered all over, about 12 minutes. Place in a covered bowl to steam 10 minutes (this loosens the skin).

2. Rub off the skins, membranes, and seeds. Spread the capsicum/bell peppers, smooth side up, on a paper towel and let drain 10 minutes.

3. In a food processor, grind the walnuts, crackers, lemon juice, molasses, cumin, salt, and sugar until smooth. (Note, I like a chunkier texture, so I ground the walnuts in a mortar and pestle, and mixed it into the mixture after step four.)

4. Add the capsicum/bell peppers; process until pureed and creamy. (Note, I find it’s easier to get a creamy texture without small bits of capsicum if I processed the capsicums first, and then added the other ingredients.)

5. With the machine on, add the oil in a thin stream. Add the chili to taste. (If the paste is too thick, thin with 1-2 tbsp water.) Refrigerate overnight to allow the flavours to mellow.

Serve: Sprinkle the pine nuts and cumin on top and drizzle with oil.