Savoury galette and an almost catastrophe

I’ll start with the almost catastrophe. As I carried two savoury galettes from the kitchen to the dining table, they slipped off the cooling rack I was holding and fell –

– onto plates I had just set out.

The pastry mostly stayed in tact. There was a little cracking and breaking around the edges, and a few bits of crunchy, flaky pastry made a bid for freedom and landed on the table, but the galettes held together better than I could have hoped. Even the upside down galette flipped around again, tarte tatin-style, not much the worse for wear.

The cheese probably helped to hold the galettes together, but I am also giving the pastry a tick for being tough enough to cope with my clumsiness. Really, some days my feet seem to look out for potholes or uneven paving stones to trip over, or poles to walk into. And the number of times I’ve almost knocked over that bag of flour or sugar!

Catastrophe aside. the pastry was a delight to eat, and not at all like a brick (which would also survive my clumsiness). There is cornmeal, sour cream or yoghurt, and a long resting time. The result was different from your superfine Parisian pastry, it had character, crunch, colour, and a certain heft. It was a pastry that helped to set off the toppings on the galette, but also held its own. We talked about the flavour and texture of the pastry as much as the colours of (miniaturised) tomatoes on the topping.

Which brings me to the tomatoes. I saw these in the grocers and knew, just knew, they were destined for the galettes. They were yellow, 1960s orange, red, and a dark red-brown with darker streaks. They created a beautiful colour wheel on their own. 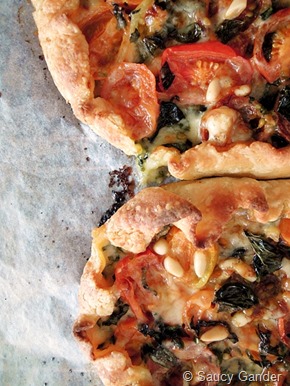 They also had that real tomato taste, that umami taste, and only needs the tiniest amount of sugar, or balsamic vinegar, to become a complete salad. Paired with basil and mozzarella, it was a real pretty sight.

Other toppings joined in the festival of colours and textures. You see, we are going on holidays, and I have a tight schedule of meals for the next week to ensure there are no perishables in the house by the time we go. So the tomatoes befriended pine nuts, and some aged Emmantal cheese sprinkled on top. In one of the galettes, brie replaced mozzarella.

It was all good. The tomatoes remained colourful and happy, the cheeses mingled in the way that cheeses only mingle for Sunday brunch (they seem to be more particular when it comes to Saturday evening dinner), the cornmeal pastry gave everything a sort of comforting (yet golden, crispy) hug, and we all ate happily ever after.

So, if you decide to try this one, go ahead, play, tweak, flip things upside down.

Oh, and don’t forget to see what other Tuesdays with Dorie bakers have done with this one. I saw the post from Lemon Grove Cake Diaries last night, the photos looked fantastic, and Karen tells a rollickin’ Australian story too.

Baking and improvising notes: I can’t help playing around with ingredients. A small bag of walnuts was on the list of things to use up before the holidays, so I also made walnut pastry using the same recipe, replacing the cornmeal with a slightly larger amount of ground walnuts (ground to about the same consistency as cornmeal). It also worked, and we had both an apple-raspberry galette and an apple-quince pie (my first lattice top pie!!).

The galette was eaten warm from the oven, and left the world without a photographic trace, but the apple pie may be making its way here over the next couple of weeks.

(from Baking with Julia by Dorie Greenspan)

1. Stir the sour cream / yoghurt / buttermilk and the water in a small bowl and set aside.

2. Put the flour, cornmeal, sugar, and salt into a bowl, stir to combine. Add the chopped butter and stir to coat with flour. Using a pastry cutter, cut butter into the flour mixture – quickly, before butter warms up – until the mixture is speckled with pieces of butter that vary in size from bread crumbs to peas.

3. Add the sour cream mixture (the recipe says one tablespoon at a time, I added the whole lot and mixed with a light hand), and fold into the dry ingredients just until you get ‘soft, moist curds’ and the mixture can come together into a ball of dough. You can knead it slightly, but try to resist over-working the very soft dough.

4. Divide the ball of dough in half.  Flatten, wrap it in plastic wrap, and chill for at least 2 hours or overnight.

31 thoughts on “Savoury galette and an almost catastrophe”