Not your average box mix brownies 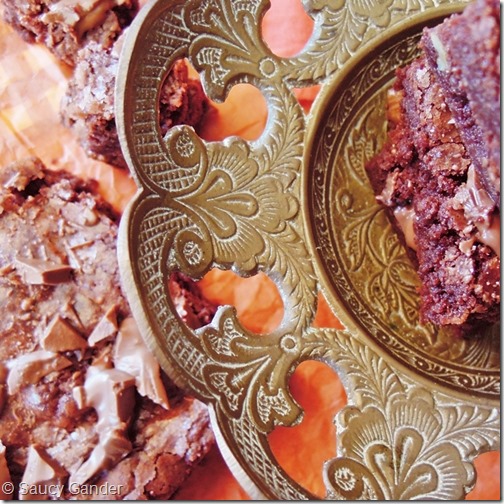 Lately, it feels like life is spinning, rushing past, so, so quickly, and I barely have time to say “woa!”.

Times like this, I like to bake and cook, take time out, slow down, and feel (slightly more) grounded. Baking and cooking helps me to remember that I don’t have to do everything at work before we head off on holiday. Other people will step in and help out, because they are good colleagues, smart people and good friends, and we’ve always helped each other out.

But, when baking starts at 9 or 10pm at night, I’ve been at a loss about what to bake. Nothing that takes too long (baking past midnight is fun but slightly surreal), or requires the Bosch kitchen mixer (our neighbours will start to give me odd looks). And I don’t want to beat eggwhite by hand and develop hausfrau muscles in my right arm only (that would be funny, but surreal and possibly impractical clothes-wise). 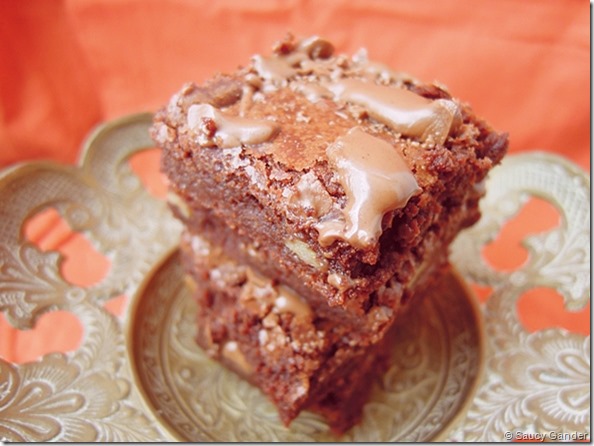 I was thinking about house warming presents for some friends we’ve known forever. They have never wanted very much, and have always been happy with what they have. Instead of giving them the usual wine glasses or home furnishings, we wanted to give them something that won’t end up cluttering their modestly minimalist life.

And last night, it came back to me: box mix brownies. I give them the mix of dry ingredients and add-ins, and all they need to do is add butter and eggs. Home made brownies within 30-40 minutes, including baking time.

I used an Alice Medrich cocoa brownies recipe to make up a box mix. I first saw this recipe on Smitten Kitchen, where Deb explained how she was converted to the idea of a good cocoa brownie, where cocoa is intentionally used in preference to blocks of dark, shiny chocolate. I was intrigued, and this idea lingered in the back of my mind like one of those cat pictures that never quite stop doing the rounds of office emails.

I tested the box mix this morning, as Medrich’s recipe asks for dry ingredients to be added in two stages, and everything in the “box mix” will be added in one step. On a whim, I also scattered some chopped hazelnut chocolate over the brownies as soon as they came out of the oven, so the chocolate melted and made the brownie slices look that much more indulgent.

It all worked! The brownies were had a thin, shattery-crusty top, with gooey-melty hazelnut chocolate that gets all over your fingers and makes you feel like a five-year-old again. The texture was fudgy, the crumbs were moist and clingy (the edges were a little firmer though).

The brownies were fragile just out of the oven, and firmed up once fully cooled. I confess I will always have a soft spot for still-warm brownies that you can dig into with a spoon, or crumble all over ice cream. As a result, quite a bit of the brownies disappeared before they had a chance to cool.

The ratio of cocoa powder was slightly higher in my mix, so these were what I call grown-up brownies: not tooth-achingly sweet, with a trace of cocoa-bitterness, which was balanced by the sweeter hazelnut chocolate scattered on top.

Making the box mix is as easy as it sounds.

I had everything in my pantry. Castor / granulated sugar, the best cocoa powder you can find, good quality sea salt and flour. I included two packets of mix-ins or add-ons – the first had lightly toasted walnuts and the second had chopped Callebaut hazelnut chocolate. Next time, I may use vanilla-infused sugar, or dark brown sugar, or maybe a tiny amount of instant coffee. The possibilities are – almost – endless.

The “box mix” went into a hand-painted box (hand painted by someone who is a real artisan) that could be a practical storage box for food or other things. Some hand-written instructions. And voila.

And we have a new favourite brownie, one that could be whipped up on any old weeknight, which could be very, very dangerous.

Baking note: The mixing instructions are to stir the brownie batter “vigorously” for 40 strokes. I think the 40 strokes are important to properly mix in the ingredients and perhaps to aerate the brownie batter. My batter looked much shinier, more spoon-lickingly beautiful, and had more volume at the end. This instruction reminds me of David Lebovitz’s “Robert’s Absolute Best Brownies”, which absolutely have to be stirred, vigorously (hausfrau-muscles-style?), for a full minute. One day, when I’m feeling fat, I will make David Lebovitz’s brownies and work off those calories.

Not your average box mix brownies

* it may also work if you add good quality vanilla-infused sugar to the box mix. Or add a pinch of instant coffee for a slightly different flavour.

1. For box mix, add the first four ingredients together and mix well, make sure there are no lumps. Include the other ingredients separately (maybe put them in small food-grade bags).

2. For brownies, preheat oven to 325F / 162C. Melt the butter gently, using a double boiler or over very, very low heat on the stove. If you have a microwave, you can also microwave the butter in short blitzes until it’s melted. If the butter starts to bubble too much, just keep going and call it special brown butter brownies.

3. Let butter cool down (because you will add eggs to butter, and you don’t want to risk ending up with scrambled eggs…I’ve never heard of scrambled eggs brownies, though maybe Heston Blumenthal will surprise me again).

4. Beat 2 eggs together and add to the cooled butter. Stir together – it will be streaky, and that’s ok.

5. Put the box brownie mix in a medium-large mixing bowl and add the butter-eggs mixture. Mix with a plastic or wooden spoon, in a graceful folding motion, until the dry and wet ingredients are incorporated and no streaks of flour or cocoa remain. Then, stir vigorously for 40 strokes. Lastly, stir through the walnut pieces.

6. Line a 8” by 8” (20cm) square cake pan with baking paper, and pour the mixture into the pan. Bake for 20-25 minutes, until a skewer come out with a few crumbs clinging (so you know the middle is still gorgeous and fudgy).

7. Scatter chocolate bits over the brownie as soon as it comes out of the oven. Leave to cool, and serve. Or, dive in with a spoon while it’s still warm, and eat it with ice cream.

23 thoughts on “Not your average box mix brownies”